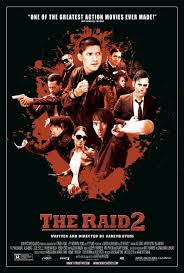 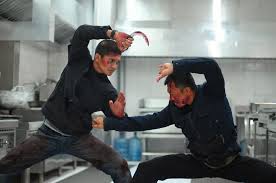 With an overload of action, this movie proves that more is not always better, and that lots of violence without creative choreography makes for just an okay film.

Asian action movies arent’ what they used to be. If The Raid 2 proves anything, it’s that kung fu and real talent in martial arts is dead. gone are Bruce Lee, Jackie Chan, Jet Li, and even Chow Yun Fat. If Tony Jaa is still around, he needs to start doing something fast. the raid 2 is an overload of stunts without creativity. There are many things that make good action including unique settings and creative moves. This movie offers none of that. It plays more like a gangster movie than a kung fu film, and is basically a riff on infernal affairs (the template for the departed.) only instead of just a police force organization and a mob organization, this film adds in even more. There are two gangs, plus the cops, and a whole slew of characters. It becomes very confusing. the action picks up in the second half, but not enough to keep this movie afloat. if it wasn’t so hard to follow, the movie would have been more forgivable. the same goes for if the action had been more entertaining. it’s not bad action, but just nothing special.

The Raid 2 is not the masterpiece of action that we’ve all been hearing it was. this is hardly one of the greatest action films of all time, as some critics have called it. perhaps the amazing amount of love that was shown for this movie comes from a younger generation that has not seen what true martial arts and kung fu action stars can do. the excitement doesn’t come from how many people they can hit, or many glass walls they can slam through. it comes from the ways these stars use their bodies and also use weapons.

The greats in this genre are bruce lee, jet li, jackie chan, and chow yun fat. if there are more on the list than names like tony jaa and donny yen have to be included. and the one thing all of these stars have in common is that they can impress us with simply their physical movements alone. the raid 2 is not in the same ball-park as the better movies from these stars.

Instead of being a martial arts film, the movie is actually in the genre of organized crime. there are two gangs in the underworld, that are at odds with each other. there’s also a team of cops running an undercover operation. this all sounds very familiar. it’s infernal affairs (the chinese, and original version of the departed,) meets the election. when our hero, rama, goes into prison as an undercover agent to get in close with the bad guys and make them trust him for when he gets out, it really feels right out of infernal affairs.

But that movie was more about the thrills, and this one is more about the action. that’s what they’d have you think anyway. the truth is the action doesn’t really pick up until the second half. the first half is more story oriented. not that there’s anything great happening in the story, however. rama gets released from prison and goes to work for the father of the man he protected while locked away.

When he was in prison, rama befriended uco, the son of the big crime boss, bangun. now bangun has hired rama, and everything is working out the same as in any other movie, except for one thing. uco doesn’t want to keep working for his father. he feels that his father does not trust him or give him any real responsibility. if he is going to continue working for the man, than he needs to impress him first and earn his father’s respect. so uco looks outside of his father’s organization, and makes some behind the scenes deals with other mob families.

The action in the first half of the movie is very sporadic. there’s a great prison riot scene, which builds slowly while a bunch of the prisoners are sitting in trenches surrounding an open yard. they stay under the roof protection because the rain is coming down hard, all around them. but then suddenly an attack breaks out, and before you can blink every prisoner has rushed the field like it’s the end of a baseball game. the guards now come in to break things up and the prisoners attack the guards. it’s a pretty cool scene, but really the only good action scene in the first half.

There’s another pretty good action scene that comes at about the midpoint of the film. this one involves an assassin for one of the families. he’s a lone assassin, and an older, long-haired man who is sitting upstairs in a nice lounge one night when he is suddenly attacked by an army of men. this lone assassin defends himself and fights off his attackers by using the entire space of the room, even changing levels by jumping from the balcony down to the first floor. the scene is pretty cool, but it really just reminds me of better scenes in other movies, like tony jaaa running around the ramp of a private restaurant in the protector, fighting off anyone who gets in his way. here, we don’t even know who the assassin really is, and that confusion ends up hurting the scene by reducing our interest in the character.

Towards the end of the movie, the action finally does start to pick up. this is where we get two new assassins, each with unusual weapons. there’s a guy who uses a baseball and bat, and there’s a girl who uses two hammers, one in each hand. both attackers are pretty brutal. the guy walks around beating his targets with the bat. he hits the ball at them and then asks them to throw it back to him, while he is walking closer, ready to pounce.

The girl is far more scary. she has a subway scene where she walks from one end of a subway car to another and wrips apart anyone who comes at her with the two hammers in her hands. this girl often uses the back part of the hammer, meant for prying things up, as a weapon she can slam into her enemies. like the older assassin, it’s not clear who exactly these two are working for, but their weapons are certainly cool.

The final action scenes are the best. that’s the way most action movies go, but here, the very last fight between rama and one of the villains, seems to go on for an eternity. the two of them slam each other through everything under the sun in their kitchen showdown, and it seems as if they are superhuman, both continuing to fight through everything that the other has thrown at them. the scene may be ridiculously long, but it is still incredibly ambitious and a lot of fun. if there were more scenes like this, the raid 2 would have been a far better movie. instead, it’s the usual asian gangster movie with a couple of cool action scenes every so often.