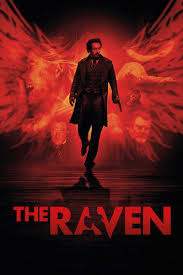 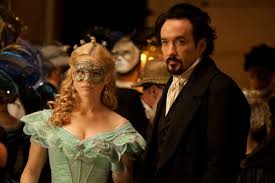 A very mediocre movie, mainly because we’ve seen things just like it before, and this movie doesn’t have a whole lot to add to the mix.

The Raven is a movie that feels very famililar. It’s a combination of a bunch of Johnny Depp movies (most notable From Hell, about Jack the Ripper), meshed together with Basic Instinct. That movie, of course, was about a writer who had her novels turned into reality when a killer started using her ideas for murder scenes. The same thing happens here, to Edgar Allen Poe, only instead of being a suspect and someone the police talk to, Poe is brought in to work alongside the detectives. The result is a bit of a mess. This movie has weak characters and a story that we’ve seen before in so many different ways. At times the film feels like it wants to be an incarnation of the dark, Guy Ritchie Sherlock Holmes movies. What it never does, however, is find its own distinct personality. Now there are plenty of scenes that work, and that’s to be expected at the hands of such a talented director, but the strive for originality or creativity just isn’t here, and that’s something that makes all the difference in the world.

The Raven is an average movie at best. It’s well-made regarding everything technical, and credit for that goes to director James McTeague. Here’s a guy who started off with the Wachowski brothers, working with them on their Matrix movies and then started directing feature films, himself, shortly afterwards. Like the fate of many directors, Mcteague’s films have gotten worse and worse. That is to say, he started out great, and then slowly went downhill. His directorial debut was V For Vendetta, which is also his best film to date. After that he made Ninja Assassin, which was fun in a B movie kind of way. And now he has this, The Raven, a movie that feels very familiar in one too many ways.

The movie is about Edgar Allen Poe, but not so much as a writer. Instead, it is more about him as a crime solver. Now, he’s no Sherlock Holmes or anything, but when the content of his stories start to become used for the scenes of murders, and the killer is clearly trying to create moments that Poe wrote about, the author is called in to help. What we get as a result is a film about an old, dreary, European city, terrorized by a killer, with a famous celebrity in the mix. This is the kind of movie Johnny Depp has made again and again, from From Hell (which was all about Jack The Ripper), to Sleep Hollow, to The Ninth Gate. The main difference is that in those movie the killer was the celebrity, and here it is the man trying to solve the case.

Poe is not a detective and so it’s a little unrealistic that he is called in to work alongside them, basically given a badge and gun to work the case. We’ve seen this storyline before where a killer uses the ideas from the novels of a specific author to create scenes for murdering his victims. The most notable example is Basic Instinct. But unlike this movie, that one handled it right. The author should be a suspect. There should be the conversation of either “Someone is copying the murders I wrote about and trying to set me up,” or “I would have to be pretty dumb to write about killing someone and then actually kill someone in the exact same way I wrote about.” But in the Raven, none of that comes into play. Poe is not even a suspect, which is completely ridiculous.

The same can be said of other characters here as well. Poe is in love with a woman named Emily Hamilton (Alice Eve, from Star Trek: Into Darkness.) Emily is the daughter of CaptainCharles Hamilton (Brendan Gleeson.) When a pocket watch belonging to Charles is found inside the mouth of one of the victims, Charles should immediately become a suspect. It’s either that he planted it there or that someone is trying to set him up. None of this is ever addressed. Instead, Charles simply says he misplaced the watch and thought he lost it, and the whole thing is dismissed.

Now there are a number of scenes that do work in this movie. Mainly the action or murder scenes. When the police officers first arrive at the house where a murder has taken place and examine the room, we get some cool ideas. There’s the hand which hangs down from the fireplace, indicating that there’s a boy inside. Then there’s the way that Detective Fields (Luke Evans), uses a pocket knife to twist a screw in a window until the window suddenly flies up, as if he pressed a secret button.

There’s also the first murder we see, where a man is tied up and strapped to a hard surface, lying face up. That’s when the killer unleashes a swinging blade which slowly gets closer and closer to the man’s chest until it hits its mark and kills him. Scenes like this are pretty gruesome (Mcteague gets to use some of that fake, computer generated blood here, that he used so well in V For Vendetta and Ninja Assassin.) They are also somewhat interesting.

Aside from the murders, there are a couple of decent action scenes. The best of all takes place on the catwalk of a production some stage actors are doing. Poe (John Cusack) finds the killer on the catwalk, but drops his gun and it goes plummeting down to the stage. Between this scene and another where the men storm through the sewers calling out Emily’s name and then quiting down to listen for her voice, there are definitely some good scenes in the movie.

The problem is everything else. When we are not watching an action scene or a murder scene, the movie tends to be pretty boring. There isn’t any worthwhile dialogue and in fact, most of the characters are pretty shallow. Poe, in particular (as played by Cusack) is more annoying than interesting. There are no great clues or clever twists. Even the big set pieces that are meant to work, such as the costume party, end up being disappointments.

With that sequence, the party is at the house of Charles, right at the time when the detectives are talking about Poe’s story, The Red Death, which also takes place at a costume party. Charles refuses to call the party off, and instead lets the police infiltrate the party disquised as guests. It doesn’t do any good, and his daughter still finds herself getting kidnapped.

There’s nothing especially wrong with the Raven, other than an ending that has no twist, surprise, or excitement to it at all. The same can be said of most of the movie. Sure there are some scenes that work, here and there, but for the most part the tension is just not there. Maybe it’s the terribly written and unlikeable characters. Cusack’s Poe, for example, is loud and arrogant and gives us no reason to sympathize with him. When we first meet him, early on in the film, he is getting kicked out of a par for stealing another man’s drink. I definitely think this movie had potential, and it also had a pretty decent cast, but it just didn’t make the effort to be anything new or creative. The ending and how devoid it is of trying to be interesting or twisty, is proof. This movie doesn’t give us reasons to want to care about it.