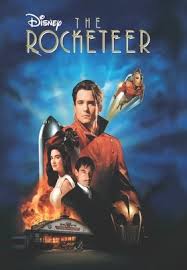 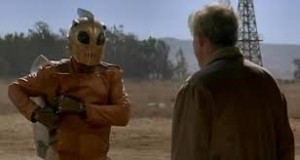 A cross between indiana jones and james bond, this one even throws in masked superhero material and has a blast mixing it all together.

A pretty great action movie that is campy and goofy in all the right moments, while also maintaining a somewhat dark criminal story and mystery. This movie has it all. It’s got the period piece setting, the romance between young lovers, the masked high flying superhero, and the over the top villain with his fortress and very cool henchman. As if all that wasn’t enough, there’s a band of gangsters, the FBI, and all of the characters in cliff’s life, who hang around the airplane field with. Just having alan arkin play the best friend is a pretty cool move. Both the story and the action really deliver, making this a great film.

The Rocketeer is a lot of fun. It’s a movie that comes from a time, when big budget action movies were done right. These were the days of the Indiana Jones films. They were the days when superheroes didn’t just take on one simple enemy, but instead got mixed up in a whole multi-layered mystery of a plot. The Rocketeer is about an average Joe pilot who has to deal with exactly that. It’s about Cliff Secord, (Billy Campbell), a guy who is down on his luck, but hoping for better things. He’s got one plane, that him and his buddy Peevy (Alan akin), have invested all of their money into, and it’s going to be his ticket to success.

Only something happens during one of his test flights, and the FBI ends up pursuing some criminals in a car chase that winds up on the roads that Cliff is flying over. The villains fire their machine guns into the sky, hitting Cliff’s plane, sending him crashing to the ground. The plane is gone. But the rocket, that those criminals were stealing and trying to get away with, has to be stored by the villains in Cliff’s plane. And that’s what really gets the story going. Cliff finding the rocket jet pack.

I love that from the very opening scene, pieces are being put into action. I love that the movie doesn’t just start off with Cliff taking the flight, but actually gets into the bad guys and the circumstances that will lead to things happening. The criminals and the FBI chase leads to Cliff coming across the rocket, and by getting into it right away, this movie doesn’t waste any time.

Next we meet Neville Sinclair (Timothy Dalton), a famous actor, who is also after the rocket. He’s the guy who hired the crime boss, Eddie (Paul Sorvino) to get his guys after the rocket. And those are the guys who were in the car chase at the start of the film. Sinclair wants that rocket bad, although we are not sure of exactly why. He lives in a mansion designed with ancient Egyptian style, and all of this makes him look almost like a bond villain. It should be noted that Dalton played James Bond in two films, and that he did this only two years prior to the Rocketeer. I think he’s better suited to play the head villain, and the this movie proves it.

We also meet Cliff’s girlfriend, Jenny, played by Jennifer Connelly. This is one of her early adult roles (of course she had a career as a child actress as well, appearing in movies like Labyrinth.) Connelly is a fun actress. She has a very elegant look, and really plays a good damsel in distress. This movie isn’t exactly at her finest acting ability (that would be a beautiful mind), but it sure is a fun role for her, and she fits the part perfectly.

Things really start to get entertaining once we meet Lothar, a sort of hetman who works exclusively for Sinclair. Just like how the bond villains always had their henchman (Odd Job in Goldfinger, Mayday in A View To A Kill), Sinclair has Lothar, and he is one of the coolest looking villains imaginable. Like Jaws, in the bond movies, he’s a giant, and he’s got a face that is the thing of nightmares. It’s all makeup of course, but boy is it effective. And the actor plays this character perfectly; taking on the less is more approach. He doesn’t speak much, and that just makes him all the scarier.

As the movie goes on, multiple characters come after Cliff and Peevy. That’s because Cliff goes out in public as the Rocketeer, saving a guy named Malcolm, from dying in a plane crash. This is the first time we get to really see the Rocketeer in action, flying high in the air, and he is just fantastic. It’s too bad this character never became a hero in other films, because he is pretty great.

This movie isn’t afraid to play into a mystery storyline, including the murder of various characters (the thief in the hospital bed, the owner of the airplane field). It also gives us lots of great locations and spends time developing details in these spots. There’s a movie set, for example, where Sinclair is filming a scene to one of his movies, and Jenny is hoping to get a coveted supporting role. We get to see a lengthy action scene of this movie play out in full detail, and it all serves the plot, because Jenny has already told us which part she is hoping for, and what her line would be. So when we see that character, we know it is supposed to be Jenny. More than that, however, this is just entertaining. The movie action scene is like something out of Errol Flynn’s robin hood, and it helps establish the time period that the Rocketeer is taking place, when movies like that were made in Hollywood.

There are plenty of other great environment elements on hand here, to also set the time period atmosphere. Cliff picks Jenny up for a date at an all girls house, where there is a mother figure watching over the girls. When he takes her to a movie, there is black and white newsreel footage playing before the film. And there is a fantastic nightclub where Sinclair takes Jenny, and what starts as a cool location scene turns into a great action scene as Cliff shows up with his jet pack to save the day.

This movie really has everything going on. I suppose, if one is looking for criticism, the fact is, the film isn’t very dark, realistic, and often features corny dialogue. It’s a campy movie, and it knows exactly what it’s doing. The action is all pretty great, including a fantastic over the top climax. I love the way more revelations come out throughout the film, and also how there are so many different organizations after Cliff. There’s the FBI, led by Howard Hughes (terry O’Quinn of lost fame), Eddie’s men, and then of course Sinclair and Lothar. This movie might not be the smartest or the darkest, but it is certainly a lot of fun, and very entertaining. As far as campy action movies, along the lines of Indiana Jones or bond films go, this one is a definite winner.