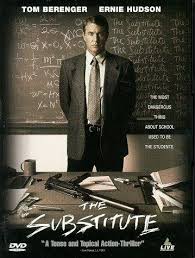 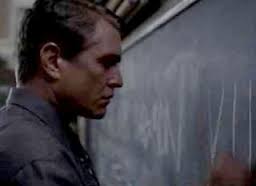 A fun, guilty pleasure kind of B movie, that might not be very intelligent, but is still a pretty cool kick ass action movie.

The substitute is a cool movie that combines classroom gangs with mercenary violence. That’s because the gang members turn out to be killers who go to school during the day, but sell drugs on the streets at night. When the attack a teacher at the school, her mercenary boyfriend takes over her classroom as the substitute teacher out for vengeance. Things start getting really good once we learn of some of the higher players involved with the drug ring and makes a turn for violence. Suddenly we have an action movie on our hands, and the second half of the film is much more exciting than the first. The dialogue and acting here are pretty average, but the story and action are a lot of fun. This is by no means a great movie, but it is definitely a great guilty pleasure kind of movie.

The Substitute is my favorite of the teacher in bad neighborhood movies. From dangerous minds to 187, there have been lots of movies in this genre. Most of the time, the movies are not violent at all, like stand and deliver or lean on me. Those movies are good for what they are, but the substitute is a lot more fun. It’s got tom Berenger kicking ass like the punisher and defying all odds. There are tons of scenes in this movie where he survives an attack and then returns to school and people can’t believe he’s still alive. It gets kind of comical at times, but that’s okay. Nobody is calling this a smart movie. It’s just B movie, stupid fun.

The premise to the film is that Berenger is Shale, a mercenary who has taken work with his team from the U.S. government, which now wants to pretend they don’t exist. Unlike most movies which would have his team be setup as the ones responsible for a bombing or something, at this point, (the losers, mission impossible 4), this movie isn’t about the U.S. government and the team. That’s just the jumping off point.

Instead, the film is about the school. Shale’s girlfriend is a teacher there, and the students give her a hard time. Especially one kid named Juan Lacas (played by marc Anthony.) this kid is a badass. He’s not a giant body builder or anything like that, but just a kid who you can tell is mister cool, mister suave, and the most popular kid in school. He’s also apparently the leader of a gang, known as the K.O.D. (which stands for kings of destruction.) down in Miami Beach, where the movie takes place, this gang is known to rule the streets.

Lacas threatens Shale’s girlfriend, Jane (Diane Venora), and the principal, (Played by the always fun, Ernie Hudson), refuses to do anything about it. He claims that he used to be police and knows that you need proof and evidence before anything serious can be done. That’s when a large Indian man steps out from behind a tree on the boardwalk where Jane is going for a run, and takes a swing at her leg with a giant stick. He’s not finished yet, only Shale shows up and steps in to kick the guy’s ass and send him on his way.

Jane is now injured and can’t go back to work for a while. She asks Shale to call up a substitute teacher for her, only he doesn’t. Instead, he asks his high tech computer savvy boys to put a profile and resume together for him and get it into the online teaching system. They quickly whip something up and the next day Shale is showing up at the school, ready to sub for Jane. Watching him interact with the kids in the classroom is one of the highlights of this movie.

Shale tries to get their attention, but learns pretty quickly that you have to earn their respect. In his case, that means with violence. These kids throw things at his back when he is facing the board and after it happens once, Shale (calling himself Mr. smith for the sub job,) is ready for the next time. When it happens again the next day, Shale catches the can and throws it back at the kid, slamming it into the kid’s face. The kid stands up for a fight and Shale puts him down to the ground. When the principal tries to talk to Shale about corporal punishment, Shale claims it was just self-defense.

This goes on for a little while, but soon Shale crosses both the principal and Juan Lacas. With the principal, named Rolle, Shale refuses to let him be fired. Rolle tries and Shale claims that the principal can’t let him go without two weeks notice, and if he does than Shale will get a lawyer and have a public hearing. With Juan Lacas, Shale makes him come to the board and write, “I’m sorry,” one hundred times for doing something. Both men now want Shale dead.

That’s when the movie changes gears and gets into it’s second half, which is significantly more violent. It starts with Shale being invited to the principal’s office after some meetings. Shale has the whole school wired with cameras, thanks to his mercenary friends, and so he watches a TV screen image of Rolle and Juan Lacas meeting in the bathroom. Rolle tells Lacas that he will have his chance to kill Shale when the teacher arrives at the principal’s office after the meetings.

This leads to a scene of Lacas and his boys chasing Shale around the school and ending up in the library. Once there, the boys and Shale end up going at it, with Shale throwing most of them out the second floor window. It’s a scene that mixes violence with comedy, between the librarian’s reactions and also Rolle, who is listening to the bodies go by his window, from his office on the first floor. By the end of the scene, things have taken a turn and the movie has become an action film. We won’t be seeing Shale in the classroom much more.

Instead, we start following his activity on the street, including a drug raid that involves Shale’s entire crew. And there are some actors on hand as his crew members, including Luis Guzman and William Forsythe. The action really builds up in this movie, leading to a great battle in the school hallways at the end. I especially like the way it isn’t Shale’s mercenaries vs. high school kids at the end, but Shale’s mercenaries vs. other Mercs who are working for the drug lord. That works because we know these other Mercs and met them at the start of the movie, when Shale was going for an interview with a guy who wanted to hire him to protect the drug shipments. The other guy who was there, interviewing for the job, ended up taking it, and is now the enemy, bringing his team up against Shale’s. The substitute is a cool movie. It has no limitations when it comes to action, and holds nothing back. For example, bazookas are fired in school hallways. This is in no way a great film, but it is absolutely goofy and exciting fun.