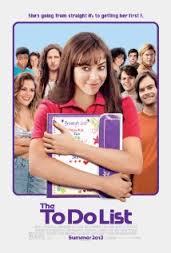 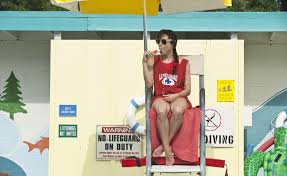 It’s not all that funny, but the story is kind of interesting and it goes in somewhat unpredictable and creative directions.

The To Do List is an okay movie. It’s one of those down the middle comedies that are occasionally funny, but never hilarious or quite funny enough. The movie goes for the raunchy of a true rated r teen sexuality movie the way American pie did, only it holds back on the nudity, which is a mistake. Part of the appeal and trademark of those films was that you could always expect a creative, lengthy nude scene in each movie. That’s not necessary, but it sure fits with the subject matter that is being discussed in nearly every scene.

The premise of this movie is that a girl is headed off to college and before she goes, wants to check off every kind of sexual situation from her list. She hears that college is like a competition of sexual experience and that only the ones who know what they’re doing really enjoy themselves. I suppose there is some merit to the premise, although it could have been explained a little better, like by someone who didn’t take advantage IN COLLEGE and now regrets it.

Instead, brandy (Aubrey plaza, of televisions parks and recreation), learns all this from her older sister, amber (Rachel bison), and from her two best friends, Fiona and Wendy. Amber is the one who really puts it into brandy’s head, but the two friends are the ones who push brandy along and encourage her, having an absorbatant level of knowledge herself. Does everyone know more than brandy about this? The fact that the friends know so much seems a little strange.

The idea that we are supposed to buy into here is that the friends are far more experienced than brandy is, and that brandy never really knew this about them and is in shock about how much they know and have done. If this were true, then wouldn’t brandy already know it, being that they have been friends for so long? It doesn’t help the movie that just about every character in the film is there to teach her something (including her parents, in some of the least unfunny and most uncomfortable scenes of the movie.)

A much better situation might have been something like American pie offered, with it’s similar story about characters trying to learn about sex and lose their virginities before going to college. In that movie, it was a group of four guys, all in the same situation, each learning from different sources. Here, it is basically the same premise, only one girl instead of four guys. Maybe if she had one friend who was in the same situation as her, it could have been funnier, watching how they both learned things from different sources. Just think about American pie with the Kevin character learning tricks from his older brother (Casey Affleck), and getting a peak at the Holy Grail book while Jim had talks with his dad and was given porno magazines where his dad analyzed the women.

ASIDE FROM ALL THE GUYS HER OWN AGE, THAT BRANDY KEEPS GETTING WITH, THERE ARE ALSO PLENTY OF OLDER CHARACTERS IN THE FILM. THERE ARE HER PARENTS (PLAYED BY CLARK Gregg AND Connie Britton), her sister, and then the head lifeguard at the pool where brandy works, played by bill hader. He’s the lazy wise guy of the movie, and hader is pretty good in the role, giving brandy a hard time. He’s probably the best thing about this entire movie.

The parents, on the other hand, are one of the worst parts of the film. The actors here are well known and definitely talented, but they push too hard for laughs and have some very unfunny material written for them. It’s not easy to do a small parent role and have it stand out as anything special, but Stanley tuck and Patricia Clarkson were sure able to pull it off in the movie, easy a. here, the parents serve as a source for repeating jokes, like how many times the father walks in on one of his daughters having sex or finds one of them in an uncompromising position.

The good news about this movie is that it avoids clichés. There are plenty of times where the story feels like it is about to step into a hole and become the usual thing, and it moves away from that trap every time. When we learn that a lifeguard doesn’t know how to swim, for example, brandy offers to teach him, and it starts to look like the rest of the movie will have that plotline running through it, but then it doesn’t. When the movie seems like it will be a light romance with one sweet and sensitive guy who brandy eventually loses it to, the story pulls the wool over our eyes. I don’t mind that brandy sleeps with so many guys and isn’t the usual version of America’s sweetheart, because this movie wants to be unique, and that definitely helps.

While there are definitely things to like about this movie, it is hardly a great film. The plot isn’t really anything special, to the point where it needs to rely on some clichéd scenes like doing a raid on the neighbor’s pool. Sure it unfolds in ways we can’t predict, but that doesn’t mean we need the occasional formulaic scene thrown in there, every now and again. Mainly the problem with the movie is that it’s not all that funny. Sure, Aubrey plaza is going for it here, trying her best, but the story is just not strong enough.

It’s not a bad movie, and better than most comedies these days which ussually turn out to be a collection of cliches, but even still, the film isn’t funny enough to truly be worthwhile. The story is based on a pretty average premise about a girl trying to cross things off her sexual situations list before she goes to college. It all plays like a female version of American Pie, only not nearly as funny. the best thing about the movie (other than Bill Hader, who is the one funny character here), is how the story avoids going down the usual path over and over again, and instead stays creative and unpredictable. If only the humor level were a little better, this could have been great film,