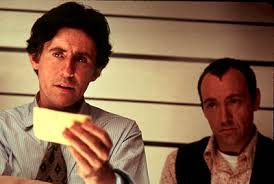 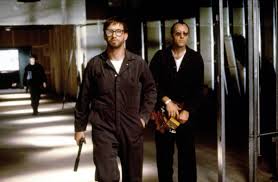 The greatest and most intense heist movie ever made, filled with All of the best elements of a stylistic mystery.

The Usual Suspects is a crime mystery movie that presents a simple story told as a puzzle, jumping back and forth in time, and leaving us with our mouths open. The ending is huge, but long before that this movie shows us why it’s great. It tells the story of five guys who meet in a police lineup and start pulling jobs together, only the truth about what these guys are really up to hides beneath the surface, appearing only as carefully constructed clues, throughout the film.

At the start of the movie, we are told that we are watching the events of last night, But really what we’re watching is the aftermath of the events, the end of it all, with most men already killed and lying on the floor of a boat. Only two remain talking, and it’s our job to realize as early as this, that we’re being asked to put the pieces together. Who are these guys and what are they talking about.

The movie is indeed complicated, but it becomes easy to follow thanks to the voice-over narration of Kevin Spacey’s character, Verbal Kent. Spacey won an Oscar for this movie, and it was well deserved. After the ship night, which ends with an explosion, we’re into the next day, and we spend time at the docks (the scene of the crime), a hospital (where there is one survivor on his death bed), and a police station, where they have found one witness who was on the boat and is willing to tell them the story of what happened.

That witness is Verbal Kent, and he begins telling of how it all went down. He starts off with how the guys met, brought in for a routine lineup. As Verbal tells his story, we are suddenly transported into the past, in new York, watching the guys meet each other for the first time.

It’s this jumping back and forth in time, as well as the setup of this night as a big evening of excitement and curiosity that kick start the movie. We don’t know what happened on the boat, exactly, but we do have some iconic images in our heads that we will see again. A body on the ground. A cigarette that drops to the floor, lighting a rope filled with kerosene. A pile of ropes off in a corner. And An explosion in the form of a fireball. And then there’s that music, haunting and brilliant at the same time, telling us there is something big out there, and making us want to know more.

The movie goes on to follow these guys doing jobs. First it’s a bunch of corrupt cops. Then some jewelers in a garage. And after that, it’s a meeting with Kobayashi, the lawyer for Keyser Size. That name, Keyser Size, is given so much weight in this movie, that he seems like more than a legend. He seems like he might not even exist at all. Perhaps a myth. Or perhaps, as the movie tells us, he is the devil himself.

But don’t fear…this movie doesn’t delve into fantasy. Keyser Size is really a legendary crime boss. It’s not known why he inspires such fear in people, but the reaction that these tough guys have to hearing about him is more than enough for us to get the point. And we do get some stories. Mainly one about how he killed his entire family when they were taken hostage by a mob. It was to show he had nothing to lose. No weaknesses.

The boys go to work for Soze and that brings us toward the ending. The boat. The big scene from the beginning. Those images are still with us, burned into our minds. Only now we get some answers. We find out everything we want to know and the payoff is spectacular. There’s even a red herring, which works superbly. This is one of the best red herrings of all time, because it doesn’t throw the story off in any way or move it in a direction that might later seem like a waste of time. Instead, it’s simply a false idea that is totally justifiable and well explained.

As we move toward the end of the picture, the truth comes out. And it’s revealed through clues and images, as a blow your mind shocker. I won’t say anymore, other than to say that the best mysteries give you all the clues and make you really familiar with the layout of the crime scene. They show you images and make you wonder how things got that way. This movie does all of that and more. It’s got spectacular voice over work, a twisted and wild story, and even a healthy dose of humor sprinkled throughout (credit Kevin Pollack and Benecio Del Toro for that).

The Usual Suspects is perhaps the greatest mystery ever put on film because it so carefully plays with the viewer and establishes the clues. It shows the audience the crime scene at the beginning and then tells us the story of the events that led up to it, starting with when our five characters met each other for the very first time. It has so much going for it, between the voice-over, the clues, the flashbacks, the music, the dialogue and the clever, creative story.