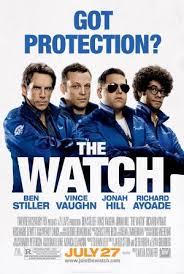 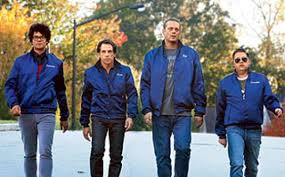 The humor really works in this old school meets Superbad comedy that uses R rated humor to explore an attack the block-like plot.

The Watch is the first Vince Vaughn movie in ages that finally gets it right. The last time Vaughn was funny was in old school and wedding crashers, both R rated films. The Watch remembers that, goes for the r once again, and delivers. Credit that to writers Seth Rogen and Evan Goldberg who provide these actors with a script that embraces sexual humor as often as it possibly can. The story is about a team of guys who chase down problems in the neighborhood including aliens, but what makes it work are the scenes of guys just being guys, hanging out and coming up with ridiculous ideas together. This movie does have aliens vs. the neighborhood storyline going on, which is anything but creative, but it is not the story that makes it worthwhile. The humor, and seeing Vaughn back on his game, playing the kind of part he does so well, are what make this a surprisingly good film.

It is no secret that Vince Vaughn movies have not been great lately. Neither, really, have Ben Stiller’s. The last time Vince Vaughn and his friends (including the Wilson brothers) were funny, were in the movies old school and wedding crashers. Both of those movies were rated r, and went for sexual humor. Then things cooled off. Suddenly these actors and the studios that were sponsoring their films started caring about ratings. The movies of these guys started getting toned down for the PG-13 crowd. Since Wedding Crashers, Vaughn’s movies have all been PG-13, from The Breakup to Four Christmases to couples retreat to the dilemma. In addition, not a one of them was very good. In addition, while these movies happily started going for PG-13s, producer / director Judd Apatow’s crew flew in to pick up the slack with the rated R films. Movies liked knocked up and Superbad and pineapple express.

Well, now, for the first time since wedding crashers, nearly a decade ago, Vince Vaughn and his team are back. The movie is the watch, and it’s the first r rated comedy Vaughn has appeared in since crashers. It’s also the best. The movie features one Judd Apatow actor, in Jonah Hill, and maybe it’s his influence that helped this movie get the tone it needed. However it happened, it’s nice to have a movie that embraces it’s rating and just goes for it, the way that Superbad did.

The Watch is about a team of four guys who join up to protect their neighborhood, after a security guard at the local Costco store is murdered. The manager of that store, Evan (Stiller), is the star of the film, and the normal, straight man that puts the team together. He puts up flyers and gets the boys to come to his house for their first meeting. It’s Evan, Bob (Vaughn), Franklin (Hill), and Jamarcus, (Richard Ayoade). The plot has them take on aliens, which is a far cry from a storyline that would involve sexuality, and yet this movie finds countless ways to make that happen.

That’s because it treats the movie about a group of guys hanging out together the way it might really be. The conversations aren’t about whiny romantic relationship issues, but instead, about ejaculation and sex. They discuss at length the way that the slime from the aliens seems a lot like semen. They talk about dressing one of them up and possibly having sex with another man. They even interrupt an orgy. And when Evan confides in bob about having sperm problems, it’s like the floodgates have suddenly been opened and bob goes off on rants about any question he might have on the topic. He asks about Evan’s situation in the bedroom, about the sperm bank, and about how the whole thing works. And all of this happens to be very funny.

Including sexual jokes doesn’t necessarily mean funny, and neither does the R rating, but this movie has something else going on that ties the humor and tone together. Seth Rogan and Evan Goldberg, the two guys who wrote Super bad and pineapple express, wrote it and this is the end. These two guys are like Judd Apatow’s secret weapon. And with this movie they’ve crossed over to help Vaughn and stiller get back on track. Their writing does the trick.

The plot to the movie isn’t anything special. These guys form the team and start hanging out, going on calls together whenever something in the neighborhood seems suspicious. Vaughn’s character, bob, is exactly the kind of character that Vince Vaughn plays best. He’s the cool guy with a pimped out pad and man cave. He’s the guy who would have the idea to start an adult fraternity, if he were in old school. Vaughn knows this territory, and with the right level of humor, he delivers. More than any other actor in the movie, he is on his a game here.

The guys get themselves mixed up with some very funny situations. When they get egged by a bunch of high school kids, for example, these guys don’t quit until they have caught one of the kids and turned him over to the police. Their drive after words, with them singing along in the car to “isn’t seen nothing yet,” by BTO, is hilarious. When they hit something on the road, and start discussing what it might have been, it is equally funny. Some of the ideas they come up with, based on the goo on the car, are ridiculously great. A Japanese man who may or may not have been eating octopus? Genius.

There’s a lot that works about this movie, including Vaughn playing a father who lived to give his teenage daughter a hard time. He not only internet stalks her, constantly monitoring her Facebook page, but even shows up to a party that she’s at to make sure he would approve. Most of the movie works, including all four of the main characters. By the end, however, it does become a generic action movie, with comedy placed off to the side. Luckily that doesn’t really happen until the final moments of the climax, and up until that point, it’s a hell of a film.

The movie isn’t great, because it’s story is so routine, and average. But the humor is definitely there, in ways it hasn’t been for some of these actors in a long time. The R rating and embrace of sexual conversations go a long way. If the plot wasn’t so focused on aliens, and actually took its tone into sexual situations, the way that Superbad did, the movie could have actually been great. As it is, we get that one orgy scene, but nothing else. Still, this movie is by far the closest thing to Superbad that some of these mainstream actors have ever been involved in. just look at the conversation where Jamarcus describes what he would like to happen to him on one of these house calls. Its write out of the conversations Jonah Hill and Michael Cera were having in that high school movie. The Watch is a funny movie that is saddled with an average storyline, but still manages to deliver on its humor every chance it gets.