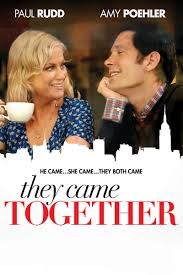 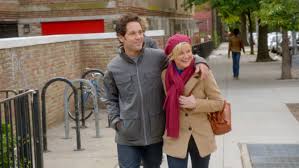 A lousy movie where only a small handful of jokes are even moderately funny, and all the rest fall flat like a barage of annoying pesterance.

They Came Together is a movie that attempts to spoof the romantic comedy genre. Instead of succeeding and pointing out how dumb the little nuances are that we’ve come to expect from these movies, the film just becomes another version of them. Only here, it also has attempts at jokes that are relentlessly awful. from paul rudd at a bar, pretty much just repeating himself, again and again, to Ken Marino shouting swish all the time, this is just not funny at all. Just look at the scene where rudd tries to propose while is girlfriend is going at it with another guy on the bed, right in front of him. not funny at all. Sure the

They Came Together is by far the worst movie from David Wain and Michael Showalter. These are the two guys who made the TV show The State, over a decade ago, and have been turning out unique and clever comedies ever since. Their first film, wet hot American summer, was absolutely their best. After that they made the movies The Ten, Role Models, and Wanderlust. Each one of these was interesting and funny in it’s own way. While I didn’t care for the ten, at least I could applaud the ambition of what it was trying to do. With they came together, there is no such luck.

that’s because the movie prides itself on how much it goes after (and fits right alongside) the usual romantic comedy clichés. It would be one thing to make fun of those clichés and how stupid they are, but this movie doesn’t do that. instead it chooses to laugh at how (supposedly) funny it is that the characters happen to fit all of the same, usual clichés as every other movie. The characters might be laughing at themselves, but we’re the ones cringing while we watch.

Amy Pohler plays Molly, a kind, charming, little owner of a small candy story. This story is on the upper west side, and called “the upper sweet side.” everything about it screams the movie you’ve got mail, including the fact that Paul rudd’s character, Joel works for a big candy corporation who is trying to put molly out of business. Now you’ve got mail, was itself a very clichés -riddled and elementary comedy. That film was based on an earlier movie called the shop around the corner, and even tom hanks, Meg Ryan, and Dave Chappelle couldn’t save it.

here, in they came together, both molly and Joel have mutual friends who are in a relationship, and those friends try to set them up together. it starts by inviting them both to a halloween party. the two of them both end up wearing the exact same ben franklin costume, and run into each other in the street beforehand. they find themselves going to all the same places to get things for the party and then walking into the building together. that means same building, same floor, same apartment. and at no time do they acknowledge that they are wearing the same costume. i know this is the point of the joke, but it’s not very funny. instead it feels very long and repetitive.

that’s kind of the motif behind the jokes of this movie. they are either long and repetitive or incredibly stupid. such is the case when we see a flashback to joel proposing to his former girlfriend (played by Colby Smulders.) he gets home early one day while she is having an affair with another man in the bedroom. you can hear her moans throughout the apartment, but Joel doesn’t notice. he goes into the bedroom, where is girlfriend and this other guy are going at it in the closet. Joel still doesn’t notice. he hears them, knows they are there, and instead of even looking for them, just walks over to the window. now, with his back to the rest of the apartment, he starts proposing. meanwhile the characters have left the closet and are now on the bed going at it. they are being incredibly loud, as Joel keeps proposing. he doesn’t notice them and they don’t notice him, despite his loud proposal. the whole thing is incredibly dumb. it could have been funny if maybe they tried to sneak out, since he didn’t notice them, but the movie isn’t going for anything interesting like that.

the whole movie is told through flashback with molly and joel meeting another couple at a restaurant. that other couple, played by bill hader and ellie kemper, ask them how they met, and molly and joel proceed to tell the story. every once in a while we go back to the table to see the characters telling the story in real time. this movie acts like the storytelling gimmick is fresh and original, but really it’s been done again and again. there is nothing creative about it at this point.

the movie isn’t all about molly and joel, but they certainly monopolize most of the running time. once in a while we see them with their freinds. with joel, he plays basketball outdoors with his buddies and ken marino plays a guy who constantly shoots bricks and screams “swish.” he screams it after the shot has fallen, showing us that he doesn’t know what “swish,” means, but c’mon. it’s so stupid and it gets repeated over and over again. at least on saturday night live skits, the jokes build up to something. they might all be in the same vein, during a single sketch, but they don’t just keep doing the same joke over and over again. instead, that joke builds in momentum. here, it is literally the same thing each time. now marino is a wonderful comedic actor who is a prime player in all david wain – michael showalter movies, but here, he is given nothing to work with at all. maybe this is an attempt at doing the phillip seymour hoffman thing from along came polly, yelling “rain man,” and “let it rain,” but with it all being just one word again and again, in they came together, it doesn’t even come close to being funny, and marino is completely wasted.

if this movie didn’t go for so much repetition in it’s jokes, maybe some of them would have been more funny. the worst of these moments has to be when joel walks into a bar, sits down and gets a drink. the bartender says something like, “looks like you had a rough day,” and joel responds, “you can say that again.” and so the bartender does say the exact same thing again. this time joel says, “tell me about it,” and so the bartender says it again. what follows is a series of broken record like lines with joel saying either “tell me about it,” or “you can say that again,” over and over, each time with the bartender repeating his line. seriously? a five year old probably wouldn’t be laughing at this.

now, luckily every once in a while something does work here. it isn’t often, and by far more jokes fall flat than work, but there are the occasional laughs. one of them comes at that first halloween party when a character can’t get out of his costume to use the toilet and so he shits his pants. he then showers and puts on a robe, and nobody notices. this isn’t the funny part. it gets funny when someone notices the costume in the tub which has been shit in, and the character who wore it insists that someone else must have found it in the bathroom, put it on, and shit in it. now this is not all that funny, but it’s certainly one of the better attempts of this film.

the other one comes when molly’s friend is trying to comfort her about joel and molly takes it as her friend coming onto her. molly goes in for a kiss and her friend is like, “are you serious?” molly’s reaction is that she thought she was being given a sign there. these are pretty much the only two jokes that work in the film. other than that it’s a series of lousy and annoying ideas. the story itself is intentionally unoriginal (they think they can act like it’s okay that we’ve seen it all before, because they are being that way on purpose, but that doesn’t exactly make this movie funny or good.) they came together feels like a rushed opportunity by two filmmakers who should have known better.

re is an occasional joke or two that works, but for the most part this is a pretty lousy film.