This Film Is Not Yet Rated ** 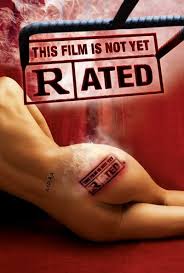 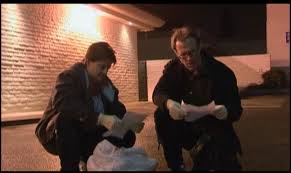 Somewhat interesting at times, the movie often feels repetitive and acts like it is trying to make too big of a deal about it’s subject matter.

It’s interesting to hear all that goes into the ratings decisions, but making the mpaa board feel like a secret organization or conspiracy seems forced in this movie. A detective is hired, and none of it is as entertaining as the movie would like to believe. aside from the detective story, the other main part of this movie consists of interviews with people in the industry who have stories to tell. this is the part of the movie that works. while the arguments are often flawed, they are at least about movies that are pretty recognizable, revealing behind the scenes details about what had to be cut out of the films, and why. this documentary is entertaining, but a lot of it, (such as boring stakeout scenes), definitely feels overblown.

This Film Is Not Yet Rated is a documentary about the mpaa. that stands for the motion picture association of america, which is the ratings board, the group that rates films and dictates how they need to be changed in order to get a certain rating. it’s an interesting documentary because it is told through the eyes of frustrated filmmakers who feel that the ratings board has no right making the decisions they do and dictating the film grades. this is an angry documentary, like many other documentaries are, out to bash the big organization. i suppose you need a point of view when telling a story, and nobody is interested in just hearing straight facts. that’s got to be the mentality behind making the film this way.

there are so many documentaries about corrupt scandals and organizations. ussually it’s about people who are doing a crime or causing a massive coverup. whether it’s enron: the smartest guys in the room, or the fog of war, or gasland, there is usually something pretty major at stake. not so in this movie. the worst thing the ratings board does is make a movie nc-17. now i understand that this can be pretty awful for the filmmaker who has devoted years to this movie (it might even be the filmmaker’s life dream), but the end result is that the filmmaker just has to change the movie a little, make some cuts, and call it a day.

this documentary consists of two things. interviews with filmmakers and actors, and a story about the guy behind the documentary hiring a detective to find out who the people on the ratings board really are. the interviews with people in the industry are entertaining. these are people who really do have stories about what happened to them with certain recognizable movies. the detective story, on the other hand, is kind of dull.

the interviews include celebrities like matt stone (south park), wayne kramer (director of the cooler and crossing over), john waters (b movie director extraordinarie), kimberly peirce (Director of boys don’t cry), maria bello (star of the cooler), and mary harron (director of american psycho.) None of these people are major players in the industry anymore. the closest ones are bello and stone. other than those two, the rest are kind of forgotten. i like wayne kramer, but he’s had such problems with his films that he is kind of on the outskirts of the industry, and peirce and harron are absolutely one-hit wonders. that’s unfortunate, since their movies were both pretty good (especially american psycho.)

luckily, even though these directors haven’t done much, the stories they have are about their bigger movies, and so we are at least getting stories about recognizable films. the main point that comes out of all of these interviews is that the mpaa doesn’t like seeing sexual positions other than missionary. that’s why peirce had to cut some of her girl on girl scene and why harron had to cut out some shots of a threesome from american psycho. some of the filmmakers make the claim that the mpaa doesn’t like to see women experiencing pleasure, and maybe that’s true, but so what? i’m not saying it’s right, but only that it’s not such a big deal. nobody is dying here, and if it was really a sexual harrassment-feminist kind of thing then why isn’t the mpaa getting sued by anyone?

i do like the part of this documentary that compares different movies side by side, using a split screen. the point of this is to show how different movies have scenes that are pretty identical and yet received completely different ratings. the documenrary is hoping we focus only on how similar the scenes are, and don’t really think beyond that. if you think a little harder, you realize that maybe this scene isn’t the only reason the movie got the rating that it did. still it’s kind of fun to watch the comparison, so long as it isn’t taken too seriously.

another claim the movie makes is that when a studio puts out a big movie, the mpaa gives them a list of the exact changes they need to make in order to get a certain rating. when an independent film gets a rating however, the mpaa refuses to submit this list. that might be the closest argument to corruption this documentary makes, except for one thing… it seems that the studios are paying the mpaa. they’re in the back pocket of jack valenti, the man who runs the organziation. now that sounds totally corrupt, except, they aren’t paying for good ratings. this isn’t bribery. they are paying for the mpaa to do more work and come up with a list for them of exactly what needs to be changed. if you have more money, you can pay for more things and have more advantages. that’s simple math, and hardly a scandal.

the interviews might have flaws to their arguments, but at least they are interesting. maria bello is on screen simply because she is a name actress and wants to argue about a scene where we see her pubic hair. if she was really trying to justify her point, there would be mention of a scene where we see a man’s pubic hair up close as well. but she is the only actress who appears, and so gets credit for bravery of at least putting herself front and center.

aside from all of the interviews, there is the detective story. the idea here is that the mpaa keeps it’s members a secret and shouldn’t be allowed to do that. any other decision making body, (other than the c.i.a), has its members front and center for public criticism. so the man behind this documentary hires a detective to track these people down and find out information about them. when they find these people, they go through their garbages to look for ratings forms. this part is kind of interesting, seeing exactly what the ratings people are looking for on the forms, but otherwise the detective story feels pretty fake and overblown. especially during the stakeout scenes.

This Film Is Not Yet Rated is definitely worthwhile. it might not be as serious as it wants us to believe and it also might not make arguments that are completely sound, but just learning about the industry and hearing all of these stories is good fun. if only the detective story were a little sharper, or if the points that the interviews made were a little more focussed. there is much to be desired about this movie, but at least it has some good stories to tell. i especially like the one about matt stone putting things into his team america movie, just so that he could take them out and make the mpaa think that they got him to make changes. more stories about clever strategies like that might have helped this movie along.