This Is Where I Leave You ** 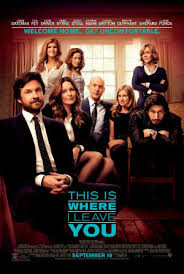 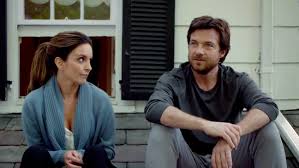 Starts out with some promise, but becomes the same old, usual, dopey comedy by the half-way point and remains that way for the rest of the film.

This movie starts out fine, and has a pretty decent first half. Not that anything which pops up during that time is great, but it’s enough to get us interested and want to know more. What we get in the second half just can’t hold up. The humor is often pretty lousy and there are so many different characters and storylines here that even the ones that do work (like the one between Tina Fey and Timothy Olyphant) get lost in the mix. On top of that, it seems like most of the stories are so poorly written that we have to get extra filler scenes that have nothing to do with anything, (like the temple, smoking scene), just to keep the ball rolling. Every relationship and story on screen has conflict, and almost none of it feels real. The Jason Bateman conflict is the only one that is given enough attention, and that ends up hurting the others tremendously, killing whatever potential they might have had.

This Is Where I Leave You is a sort of family drama mixed with multiple stories of romance. It’s the more depressing version of The Family Stone. The reason for it having that more dour tone is not because the characters are all coming home for the funeral of their father. If that was the reason, it would be understandable. But here, the tone is dictated by how many characters are cheating on their partners, lying to their partners, having affairs, and fighting with their family members. All movies need conflict, but this movie is overflowing with it, and most of the storylines aren’t very much fun.

The most impressive thing about the movie is the cast, and you know that going in. There are few surprises here, other than maybe that Rose Byrne and Timothy Olyphant are in the movie. The rest of the cast members are prominently featured on all of the posters and advertisements, and it’s a pretty eclectic group. Jason Bateman is the star, simply because he is the best at playing the everyman, that we can all relate to. Tina Fey is the gem. She’s the one who actually makes this movie interesting. Not what she does for the movie, but just that she’s in it to begin with. And then there are rising stars Corey Stoll and Adam Driver, as well as veteran actress Jane Fonda as the mother of the group. All fine actors, none of them especially entertaining. Except for Fey.

The movie gets off on the wrong foot, starting with an opening scene where our main character, Judd (Bateman) sneaks into his house to surprise his wife that he’s home early, only to find that she’s sleeping with his boss. How many times have we seen this exact scene before, catching the two people in bed, in the act, at the exact worst moment. At least Silver Linings Playbook found a way to do it right, catching the two in the shower and only showing it to us in flashback form of quick memory spurts. Here, in This Is Where I Leave You, it feels completely cliched, which is the worst way to start a movie.

Luckily the film does get better. Judd gets the call from his sister, Wendy, that their father has died, and he flies home to see the family. That’s when we start meeting all of the characters, one at a time. There’s Paul, (Corey Stoll), the older brother, and his wife, Annie (Katherine Hahn.) Then there’s Wendy and her husband, Hilary, the mom (Fonda), and some other characters in the town, including a young Rabbi (Ben Schwartz, from TVs Parks and Recretation.) The introductions to the characters are handled well. In fact, many of them make us curious to want to know more.  Such is the case with the Timothy Olyphant character, Horry, who lives nearby and seems to have a problem that we don’t know about.

For a while things seem okay, as Hilary and the Rabbi explain the situation. Despite the family not being Jewish, their father wanted them all to sit shiva for them, which is the Jewish version of a wake. It lasts for an entire week, and means that every day the characters sit around in the living room telling stories about the loved one who passed, and just spending time together. It’s a fine setup for a plot about siblings who haven’t seen each other for ages, now having to spend lots of time together. The problem is that the movie doesn’t really have very many places to go after that.

The first giveaway that this movie might not work out so well is when the humor level starts falling flat. There Hilary who keeps telling everyone who comes to visit them at the house about how hung her husband was and what their love life was like. Then there’s the youngest brother, Phillip, (Adam Driver) who shows up late to the funeral blasting his music from a convertible Porsche. Really? Blasting music while showing up late? And then he is cursing because he is late. Maybe that’s not the thing he should be embarrassed about, and if he is, then he shouldn’t be blasting music calling so much attention to himself.

Not surprisingly, every character has a problem. Every relationship is filled with conflict. In the case of Judd, he hasn’t told his family that he and his wife have broken up. Things get even more complicated for him when she shows up pregnant and insisting that the baby is his. Meanwhile, Paul and Annie, are trying to have a baby and just can’t conceive. Annie is especially stressed because Judd used to be her boyfriend, and now he’s having a baby when he doesn’t even want one, and she’s jealous. And then there’s Wendy, whose storyline gets the least amount of time, with her husband who just doesn’t pay attention to her because he’s always on the phone. There’s still more. Phillip has a woman (Tracy, played by Connie Britton), that he’s been dating who is twice his age, used to be his therapist, and is now the woman he is engaged to be engaged to.

It’s a little too much fluff and not enough filling. That’s how we end up with scenes like the siblings all sitting around a classroom at the temple smoking marijuana just to set off the fire alarms. What is the point of this scene other than that it is supposed to be funny (and isn’t)? Another example has Paul and Annie upstairs in a bedroom having sex one day while the baby monitor is on right beside them and everyone downstairs is sitting around listening to it. Once again, this is equally stupid and ridiculous. The family would have turned the baby monitors off the second the sound started coming in. They wouldn’t sit around listening and laughing.

Judd finds a girl in the town (Rose Byrne) that he used to have feelings for, and she is miraculously still single. What is she just waiting for him to come bac to town? They have a few romantic scenes that center around an ice skating rink and lying down on the ice while listening to music, and it feels right out of every other romantic ice skating movie (The Cutting Edge.) And that’s really this movies problem… aside from its initial premise about bringing the kids under the same roof for a week, it really doesn’t have anything original to offer. Every storyline feels like something we’ve seen before, againa and again.

Now, somewhere in the mess of a massive onlsaught of storylines and problems, there are some stories that do actually work. The one between Tina Fey and Timoth Olyphant, involving an accident that left him brain injured and a past that they once had together, is pretty cool. But it is given very little screen time. The one with Judd, his wife, and his boss is okay, despite it’s shaky opening with that bedroom surprise scene. But there’s very little memorable here. And when the mom turns out to have a surprise of her own, it’s definitely too much. The movie definitely felt entertaining in the first half, before they started grasping at straws searching for anything that might even be semi-funny. More often than not, it wasn’t. When a kid walking around with a little toilet to poop in is the funniest thing in the movie, you know you’ve got a problem.