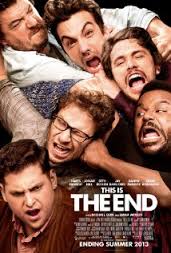 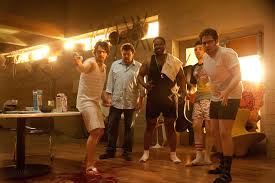 A very funny and cool movie that is smart about it’s humor and characters and even manages to tell a clever story.

This Is The End is a pretty great movie. it’s funny and clever in all the right places. it takes this absolutely crazy story about the end of the world and has it’s characters often approach the situation and their relationships with each other, realistically. the first part of the movie is a celebrity-filled party at James Franco’s house, but after that it really becomes about this band of six guys trying to survive and also to stand being around each other. in ways that remind me of movies like from dusk till dawn, this film could be looked at as two movies in one. first there’s all the comedy (the party), and then there’s the action (the survival story.) But the thing here is that the comedy doesn’t stop. it’s loaded in there throughout the movie. i love that this film takes this huge cast of friends and has them all playing themselves. each actor is playing a version of himself instead of a made up character. that gives us the opportunity to get lots of jokes about the actors and the movies that they’ve been in. this is the end is a hell of a movie, well-written, funny, and even creative. the movie doesn’t settle for formulaic moves (there’s no all night party that last the duration of the film), and instead, finds interesting and unique ways to tell it’s story, with jokes around every corner.

It’s no surprise that the movie this is the end is good and funny. This is the Judd Apatow gang who are smart about the films they make and tend to turn generic storylines into works of gold. That’s what happened with Knocked Up, Superbad, and forgetting Sarah Marshall, to take just a few examples. And like superbad and Pineapple Express, this is the end was written by Seth Rogen and Evan Goldberg. The surprise of the movie is not that it’s funny, it’s that the movie is smart and creative. These guys know what they would want to see, if they were watching the film, and that’s exactly what they give us.

The movie is about a one night party at James Franco’s house that coincides with the Apocalypse. it all begins with Seth Rogen picking up his longtime friend, Jay Baruchel, at the Los Angeles airport. Each actor in this movie is playing himself, or “a version of himself.” what that means is that the actors are playing a comedic take on themselves, as opposed to a documentary or something, where they are literally just being themselves. Jay doesn’t live in l.a. like most of rogen’s other friends, but he is here to visit and have fun.

at rogen’s house, the two guys take in everything that rogen has setup on the table for jay, (such as the name jay spelled out in joints), and then they quickly get to smoking pot and playing around with things. this reminded me of scenes from knocked up, where the characters would smoke and then do the craziest, dumbest things that just looked like a ton of fun. there’s another scene, later on in the movie where a whole group of these guys do lots of drugs and then go nuts on each other with tripping and having a blast acting crazy, and it’s one of the best scenes in the movie. we get to see what they are halucinating in that scene and it turns out to be pretty funny.

back with rogen and jay, the two of them now go to the party at franco’s house. jay is not really one of the apatow guys (according to this movie), and doesn’t feel like he fits in. he particularly has a problem with jonah hill, who acts like the sweetest, most nurturing guy in the world. jay thinks jonah is being fake and is belittling him. when seth and jay get to the party, there are celebrities everywhere and most of them are having some pretty funny conversations. this movie has great ideas about which actors to bring in, but i wish that there were more scenes with these actors. even to get one solid dialogue scene that lasted more than a second with the three guys from superbad, or with paul rudd, would have been nice.

on the other hand, i suppose i understand why the movie didn’t go that route. this could have easily been an all night film, like a from dusk till dawn situation, where all the characters had to do was survive that one night, but it’s gonna be one hell of a night – kind of thing. and that might have been neat, but it would have also been all conversations and jokes and making fun of each other or of other people. it would have been all about the celebrities and not much about the plot. and by the end of the first hour, or so, not a whole lot would have happened.

instead, the movie does choose to focus on plot. what that means is that after only about a fourth of the film, or so, the accopalypse has happened, and most of the characters in the film have been wiped out. we are left with only a handful of these guys, now staying in the house together, locking themselves in, and hoping to survive. this is where the movie takes a major turn and becomes a different kind of film. it’s no longer about a party, but now about survival.

the best thing about all of this is that in this absurd and crazy plot about monsters and end of the world material, the way the characters often handle things is realistically. we get to spend time with them as they are in bed on that first night, and none of them wants to be alone, in this strange house of james franco’s. so they end up all bunking with each other. we get scenes of them turning on each other and of the truth about how they feel coming out. i love the idea that jay doesn’t like jonah or some of rogen’s “new” friends, because that it completely true to real life when you have friends from different places who don’t know each other very well, and who are only connected because they know you.

what also works about this movie is that each characters gets to be funny in his own way. it helps that these guys are playing themselves, because that means they can make fun of themselves and make jokes about each other. there are jokes about seth rogen’s laugh, for example, or about what “the green goblin” (franco in the tobey maguire spiderman movies), can afford. There’s a fantastic sequence where the boys try to film their version of pineapple express 2, with the same three principal actors playing their parts, and a very funny plot about woody harrelson.

the movie is basically told through the eyes of jay baruchel, more than any of the other characters, and that’s because of two reasons. first, he is the new guy in town, the fish out of water characters who is brought in to this world of madness. secondly, he is the most rational character in the movie. he’s the guy that thinks the rest of them are being ridiculous when they want to all cuddle with each other. and he’s the guy who sees the blue lights from the sky first (along with rogen), and tries to tell everyone, whereas rogen wants no part of the discussion.

the movie goes in some pretty interesting places towards its end. i like that we get monsters and wild effects and also some real answers about what it all means. i also like that more often than not, the elements that most movies would side step and avoid, and yet that would really happen in this situation, are brought to the surfrace here. one example is what happens when they are drawing straws and the guy who chooses the short straw just refuses to go? another is the idea of what happens when there are a bunch of guys and only one girl and it’s the end of the world? the girl might not be thinking sex, but you better believe the guys are. now there are lots of things this movie could have done that it didn’t get to, and i wish it had. there should have been either a cameo, or at least a mention of judd apatow, the guy who is the reason while all of these actors know each other. there could have been a moment between seth rogen and paul rudd (they had their forty yr old virgin insulting each other scene, and then their knocked up version of that scene, why not another one here?) but finding fault in the places where the movie didn’t go seems like a waste of time. especially since what the movie does give us is so good. it’s a very funny comedy loaded with creative ideas.