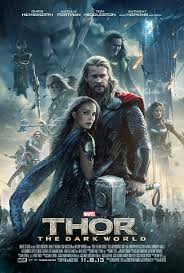 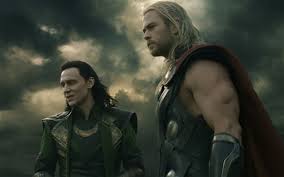 Not nearly as entertaining as the first film, this one amplifies both what worked and also what didn’t, so that the other worldly scenes are great, and the earth scenes are terrible.

Thor 2 is not very good. It’s okay, and certainly has some cool qualities to it, and there’s plenty of it that really is enjoyable. But then there are just so many ways where it goes wrong. The promise of this movie seemed to be that it was going to focus more on Asgard, whereas the first film focused more on earth. Yes, Jane foster (Natalie Portman), is brought to agar in this movie, by her boyfriend, thorn, but even still, the movie does the split between agar and earth just the same as it did in the first film.

The difference is that in the first film, the earth scenes were aided by having agent cousin (Clark Greg). He would interrogate thorn, and hold thorn in the shield compound with Hawkeye watching over them. Those pieces connected Thor to the other movies in the marvel universe. This movie does none of that. It saves a cool scene of the marvel films that are coming, for the end credits, but why not have something to connect it during the actual length of the film (there is one quick cameo from another avenger, but it’s over as fast as it appeared, and hardly the on the same level as coulson’s presence was in the first movie.)

When Thor 2 begins, we are in London with Jane and her team. That includes kit dennings as Darcy, and a goofball intern who follows Darcy around. We join Jane on a date she is having with Chris O’Dowd (funny in his one scene, wish there was more of him here), and Darcy comes over to the table and interrupts the date. Darcy is annoying, and just like the first movie; the laughs here don’t work at all. In the first movie, the action and story were cool, but the humor and romance were lacking. That all pretty much goes the same way for this movie.

Apparently Jane and her young scientist team have moved to London because there were disturbances in the atmosphere that led them to believe maybe there was a connection here to agar. All of that is never clearly explained, but needless to say, they were right. Being here does lead them to Asgard, but first, the come across a couple of clues. One is a very strange building where a truck floats around and spins in the air, and apparently things can be dropped through the air and then disappears before they ever reach the ground. I like how the movie takes its time to look at this situation, having the characters try out a couple of different things, and watch as their object disappear below them, and then sometimes reappear above them, falling down again.

When we cut away from all this and join Thor, he is on another planet fighting in a battle. A giant rock creature walks up and Thor swings his hammer around, throws it at the guy, and destroys him. Everything cool is over too quickly here. That rock creature wasn’t really much of a threat because he walked up, Thor handled him, and then it was over. A fight between thorn and the creature would have been much cooler.

This opening battle scene is meant to be like the frost giants battle that was the early action scene of Thor. Unfortunately, it doesn’t even come close. Whereas that scene ended up representing the best action in the entire movie, this one doesn’t really do very much of anything. This movie was directed by game of thrones director Alan Taylor, and I thought at the very least, he would have the battles down, but apparently I was wrong.

The new threat of the movie is another alien creature from another world (just like in the first film), which wants to conquer agar and earth. This guy is like a death elf or something, woken up from a slumber where he has remained frozen with his people for ages. The reason why he has now awoken is because Jane, back on earth, has come across some kind of red virus fog, which has gone inside her body and infected her. The whole thing is pretty stupid.

Now, Jane must go to Asgard to have the experts there take a look at her. When they can’t do anything about it, Thor has another idea. He will bring her to the leader of those evil elves and watch as the guy removes the virus from her so that he can have it for himself. Then, once the virus is out of Jane and in the air, thorn will destroy it. While the plot is weak, all of the action that it takes to make these things happen is pretty cool.

The action on Asgard involves space ships racing around, cannons popping up off the sides of buildings, and lots of laser gunfire. At times, this feels like star trek, only cooler. Those are the better scenes of the movie. Thor gets prisoner Loki to help him get the ether out of Jane, and I really like the way the two brothers work together to trick the elf king. All of these scenes are pretty cool. So are the ones of Loki as a prisoner on Asgard, projecting illusions of what he looks like, onto the glass.

But then the movie goes back to earth. The entire climax really takes place in London and has the hero and villain fighting while they continually fall back and forth between two worlds, London and agar. This stuff is played more for comedy than for excitement, and it doesn’t really work. When a giant beast shows up we get about a second of something that looks like it could be really cool, and then the beast disappears, as if the movie forgot about it. We learn, by the end of the movie, that the beast is still around, and likely being saved for the third film, but he should have been a part of the climax here. Thor the dark world has plenty of great moments in it’s mid-section, while on asgard and the planets nearby, but it goes to London for it’s first quarter and for its last quarter, an neither one of them really works at all.

Thor 2 is not as good as the first movie was, and the first movie wasn’t great, itself. The problems here are very similar to what was wrong with the first film. the humor is lousy, and these movies try for it too hard. The stuff on Asgard or in other worlds is great, just like it was in the first movie. It’s actually better here, with space ships and gun fire and really cool futuristic looking scenes. but the stuff on earth is much worse, as is the storyline about an ether (some kind of virus that is living inside of Jane Foster.) in the first movie we got a shakespere-like storyline about bastard sons and betrayal. Here, we get dark elves that are basically just out to conquer the world. Thor 2 is okay, but it’s definitely not all that great.