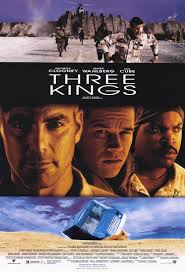 A fun and smart action-comedy that is as exciting as it is witty with the characters going on a secret mission to find gold in Iraq.

Three Kings is a movie about American soldiers who signed up for combat, but found themselves just sitting around in a hot dessert, partying and messing around. The time is the first gulf war when Iraq invaded Kuwait and the American troops came in to stop them. Only Iraq didn’t put up much of a fight and the American soldiers were left wanting more. That’s the scene at the American camp at the start of the movie, and so the movie then takes its characters into the heart of what was really going on, behind the scenes.

The guys spend their days stripping down Iraqi people who might have weapons or bombs on them, and they find a sort of treasure map inside the butt cheeks of one of these men. Special Forces officer George Clooney hears about the map, as does commanding officer Ice Cube. And all four men find themselves confronting each other in a tent. None of them wants to turn the map over to their higher ups, and so they agree to keep it a secret and go after the gold themselves. And this is the setup of the movie. Four guys bored and looking for excitement, set out not to fight a war, but to find a treasure. And they do find it, early on, but get caught up in something much bigger then they anticipated.

Once the guys get out there looking for the treasure, they start to see the way Iraqi soldiers are abusing the people. The Iraqi people were told by the U.S. to rise up against sadam. And so they did. But apparently the U.S. had no intension of helping these people afterwards. Our soldiers were there only to liberate Kuwait. And once sadam left Kuwait alone, what he did to his own people was not our problem. Only for these four guys it became their problem. They see an Iraqi soldier shoot a defenseless woman in the head, and suddenly they can’t just walk away. Clooney let’s his head fall against the steering wheel of the car, because he knows that with this moment, everything has suddenly changed. Things are no longer as simple as just taking the gold and leaving.

The four American soldiers try to take the Iraqi people with them and the Iraqi soldiers come after them. They shoot smoke bombs into the air, capture Wahlberg, and imprison and torture him. And Clooney, Cube, and Spike June now have a new mission, to rescue their friend.

The movie has a definite political agenda about the people of Iraq trying to rise up and getting crushed. But it also has morality issues; such as the way none of the guys can leave even though it is all they would need to do to be rich for the rest of their lives. And then it also has action. Plenty of it.

There are multiple gunfights and explosions, and it’s all done really well. But the highlights of the film are the humor and the creativity in filmmaking. Spike June (the director of being john malkovich and adaptation), is on hand, acting in this movie, playing a red neck. He’s in the picture strictly for comic relief, and has a lot of fun with his role. The other three actors are all stars, at the top of their games here, fully aware that they are making an important movie.

And then there’s director David O. Russell, showing off remarkable creativity. Apparently He was a real asshole on set, but a very talented genius behind the camera. O. Russell has a number of scenes throughout the movie where he literally goes inside a character’s chest to show us what a bullet has done to the character’s insides. In some cases the bullets have released green bile and in others, they have collapsed the lungs. It’s not pretty, but it’s cool as hell.

And then there’s a shootout scene where every action takes place in slow motion so that you hear three gunshots go off and then about thirty seconds later you hear the sounds of them striking a person. This method of delaying the speed of gunshots goes on for the entire scene and it’s very clever.

By the end of the movie, the guys have some serious decisions to make about what to do with their gold and about how their mission has been redefined after there eyes were opened up by the things they saw. Wahlberg is the one who has changed the most, not only because of his torturing, but also because he was the one who was most against helping people earlier on.

There’s a lot of character change and lesson learning in this movie, but it never feels preachy. Instead, it feels like characters have become more worldly and knowledgeable and as a result their outlooks on life have changed. This is a very smart movie with an unusual story and some really artistic ideas.