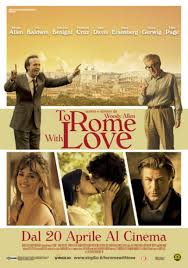 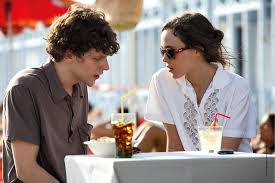 A unique movie that tells four different stories set in Rome, each creative in its own way. There’s the story of the young man who becomes involved with a prostitute do to mistaken identity, another of a man who proposes putting an opera singer in the shower on stage because that’s how the man sings best, and still another where an average guy becomes an instant celebrity. The final story has Alec Baldwin playing a sort of muse / chorus / narrator and is as funny as the others. Most of these stories feel like one joke situations, but even still, those jokes are very funny and the actors commit to them completely. We are hooked from the moment each story erupts into it’s joke, and are on board for the ride to see where each of the characters will end up.

To Rome With Love is a very funny movie. it’s not that all the stories are hilarious or anything, because they aren’t, but every one of them is creative and funny in its own way. each one of them is basically a one-liner premise and that’s okay, because that single idea is so interesting and unique that we want to watch it carried out to last for the whole short story. we want to watch what happens as each ridiculous situation is taken to the next level or set in the next location.

there are four stories on hand here. if there were more than that, than maybe the fact that each story was basically just one idea wouldn’t have seemed so obvious. the movie might have worked better with a whole ton of stories, like love actually, but even still it’s a pretty good movie.

so now for the stories. each one is pretty cool and very different from the others. the first is the story with the most celebrities. Alec Baldwin, Jesse Eisenberg, Ellen Paige, and Greta Gerwig. the idea here is that the Eisenberg character, jack is happily in love with his girlfriend, sally (Gerwig.) That’s when her friend, Monica, (Ellen Paige), comes to stay with them. Monica is a seductress of sorts who doesn’t stop talking about sex and the men she’s been with.

at pretty much the same time that Monica comes to stay with them, jack runs into a famous architect on the street, named John (Alec Baldwin). he invites John over for a drink and to start hanging out with him. John agrees because he sees jack as a younger version of himself. jack is now taking classes at the same school where John used to, and even on the same block. it’s also no coincidence that their names are John and jack. the story is about how jack can’t help but fall for Monica and how John keeps warning him that this is going to happen.

there are many scenes where John is more like a chorus, responding to things the characters say as if he is not even there. Monica will say something, for example, and then John will be like, “oh god, is she serious?” the idea is that maybe he’s a voice in jack’s head or maybe jack really is John in the past or something like that. Baldwin’s reactions are what make the story.

the other stories don’t have as many celebrities, but they are just as funny. one of them has Woody Allen playing the father of a girl who has met the love of her life in rome, a nice italian man, and is ready to get married. the two of them are engaged, and Woody’s character, Jerry comes to stay with them, along with his wife. that’s when Jerry hears the father of his daughter’s fiance singing in the shower. this father has the most amazing voice, and it gives Jerry an idea.

the idea is that this man should sing opera on stage and Jerry can produce it. only there’s a problem. the man only sings well in the shower. and that’s when Jerry gets his crazy revelation. he starts brining a shower out onto the stage with the man signing inside of it, under the water, as the show goes on all around him. the sight of this man showering in front of everyone, on the stage, soaping up and shampooing, is hilarious.

that’s one of those one-joke stories, but it is still pretty great. there are other funny moments in it too, like the reactions of the father’s family to the ridiculous and embarrassing idea. the man’s wife is so angry about it that she tries to stab Jerry. that’s when Jerry hides behind his wife. this is a perfect Woody Allen scenario, and it really helps that it comes in a movie with multiple stories. if there was ever a film that could handle one-joke ideas, it was a movie like this with a bunch of stories to balance each other out.

the two other stories are also very funny. the first one has italian actor Roberto Benini playing a regular guy who suddenly becomes an instant celebrity. the paparazzi follow him and want to know every intimate detail about his life, and he loves every moment of it. he goes on talk shows and describes his morning routines and stupid little things like that. the punch-line is that the media can’t get enough of it. this story, like the shower one, is totally ridiculous and all the more funny because of it. this one is a sort of satire on the reality show star, and the flavor of the moment, and Benini is the perfect actor to be playing the part.

the final story is the most like a usual Woody Allen film. it’s about mistaken identity. a couple gets separated and lost from each other and that’s when the man has a prostitute come into his room, thinking he is someone else. the prostitute (played by Penelope Cruz), has already been paid for, and when the man’s family suddenly shows up to meet his new wife, they assume that this woman is her. considering she was just all over him when they walked in, he has no choice but to go with it. this story, like the others, is pretty funny, but also based on a very simple premise. the whole movie basically goes this way. the stories are unusual and creative and very funny, but it would have been nice if there was just a little more to each one. still put together they make for a very good film.