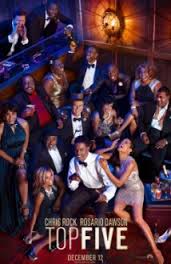 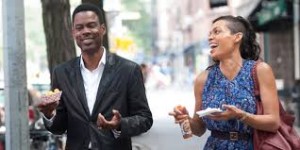 Few laughs and lots of cliches in this movie about a guy going from place to place with a reporter as we watch them slowly fall in love.

This movie is a bit of a mess. It’s about an actor who is trying to give up doing comedies and get into dramas instead. He is on the weekend of the release of his new dramatic movie, but it’s also the weekend when he is getting married. And on top of that, he decides to do an interview with an attractive reporter that last the entire weekend long. This is pretty ridiculous. The reporter goes with Andre everywhere. They go to see his family and they go to see her family. And it becomes completely obvious from the very beginning just where this movie is going to end up. There is no plot here, other than the two of them going from place to place together. At the end of the movie, for the first time, some real plot and character starts to come out. This is where we learn why Andre is giving up comedy and it is some of the best stuff in the movie. Unfortunately the movie tries to be funny as often as possible, and just doesn’t make the cut. The main storyline is filled with cliches and is incredibly predictable. This movie needed to put some effort into being something unique, and not just being content to go down the same path as usual.

Top Five is not a very good movie. Even from the trailers, it seems that there is no clear conception of what this movie is actually about. Instead of focusing on plot, the trailers show a bunch of famous black comedians sitting around cracking jokes. This is the kind of movie that people are supposed to go and see because they like the actors in it, and not because they know anything about what the movie is actually about. I would like to say that this is a plotless film, only it isn’t. It just has the same usual plot that we’ve seena thousand times before, and they certainly weren’t going to show that in the trailers. Show they opted to show nothing and disguise it as gold instead.

The basic scenario here is that Chris Rock (who not only stars in the movie, but also directed it,) is playing Andre Allen, a comedian who has not only done stand up, but also headlined a beloved movie trilogy about a smack talking human sized bear who is a cop. It’s Ted only bigger, and he’s working for the police. The idea of these movies sounds funny, only we never get to see more than a second of it. Why not give us a scene from the movies every now and again, thrown in there, just for fun. Like the fake trailers that started out the movie Tropic Thunder. At least Top Five could have shown us a fake trailer for one of those Hammy The Bear movies. It probably would have been the funniest scene in this entire movie.

At the start of the film, Andre is at the point where is done with comedy. He is giving it up. Of course everyone wants him to get back into the bear suit and give them some more of what they love, just like in Birdman. Only Andre wants to show that he’s got more than just comedic talent, and so he makes a serious drama about the Haitian revolution called Uprise. And nobody goes to see it. Still, Andre spends the weekend promoting this movie and going on a multi-day interview with a single reporter.

This reporter is Chelsea Brown, played by Rosario Dawson. I don’t understand the concept of this weekend long interview. Its as if she’s writing a book about him or something. Only she isn’t, of course. Does anything like this ever actually happen? She goes with Andre to all of the press junkets he has to do and just sits on the sidelines watching. Obviously the point of all of this is that something will happen between the two of them. Especially since the movie really has nothing else going on at all.

Aside from that his Haitian movie has just come out, Andre is also in the middle of the biggest weekend of his life. That’s what the movie would like us to think, anyway. He is supposedly getting married this weekend, and his fiance, Erica Long (Gabrielle Union,) has a reality show where cameras follow her around everywhere. She is completely fake, doing everything for the cameras, and Andre is clearly sick of it all. When he asks for a kiss in private, she says to him if it’s not on camera, it’s as if it never really happened.

This movie could not be any more obvious if it tried. Clearly Andre is unhappy with his wife, to the point where she is a phony and he sees through it to the point where they are not right for each other. In real life this would be a small hiccup in a relationship, with Andre having a talk with his future wife. In the movies, it is always a deal breaker. You’ve Got Mail is one of the more mordern examples, where both characters are seeing people and both of their partners turn out to be lousy or annoying people who are just not right for them. How convenient.

In Top Five, Erica goes with Andre everywhere, including to meet his father and then all of his siblings. At one point they go into a hotel and find Erica’s boyfriend there with another guy celebrating his birthday by getting a room together. That ends the relationship between this guy, Brad, and Erica. But of course, this movie can’t get out without giving us some terribly unfunny scenes of what Brad likes Erica to do in the bedroom and how she gets her revenge on him with a tampon and some hot sauce. This is awful stuff.

The best scene of the movie takes place in the strip club of Andre’s bachelor party, and the only reason the scene is so good is because of the other, funnier celebrities who are making cameo appearances here. Jerry Seinfeld and Adam Sandler. Sandler has one funny line about a prenup and how he did not get one. Seinfeld has a couple of really funny rants. One of them is about cheating and never admitting to it, no matter what. Another one happens when he accuses a stripper of stealing his wallet and has to figure out where she might be keeping it.

Other than that one scene, the movie really isn’t funny at all. And the plot is just so horribly cliched. Andre and Erica spend the entire weekend together to the point where there is no way Andre’s fiance would be okay with this. And of course the two of them fall for each other. Then the movie follows the usual romantic comedy tropes of having a discovery and fight and then having them go their separate ways before coming back together. Movies that break or alter the formula, like In A World, show their creativity by doing something different. Movies that allow themselves to fall right into it, like this one, show that they are really not making any effort at all.

The storyline to this movie does have one decent quality, and that’s a twist that comes at the end. Does every movie need to have a twist these days? I guess so. Here, it is well received since it is the only moment of an attempt at originality in the entire film. I just saw another comedy recently, Bad Words, with Jason Bateman, at that film also had twists at the end. Is this where we are today? Not even comedies can get away with just being funny and have to surprise us with their plot instead? Maybe its a sign that we are in a smarter time, where we need clever story lines to get us through something, but when every movie has them, they just don’t seem as special anymore. Top Five is a pretty poor movie on lots of levels. If the movie were really about this being the weekend of Andre’s wedding, then where is the wedding scene climax (or anywhere in the film, for that matter?) I suppose that’s one cliche this movie avoided, and we should applaud it for that. Every other one, it certainly made a point to copy. A more creative and original plot would have been appreciated. This movie works when it tries to get serious (all of the stuff about Andre’s drinking and why he gave up on comedy,) but most of the film tries to be funny, and instead ends up just falling flat.