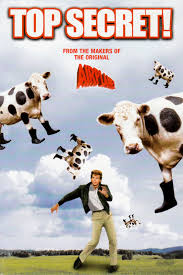 Clearly the inspiration for hot shots, this movie is loaded with jokes, but the storyline isn’t all that good and that ends up making a pretty big difference.

An okay movie, Top Secret is all jokes and no plot. The storyline is as simple as a guy getting taken to prison, meeting a prisoner there, escaping, and then helping the resistance get that guy he saw out. but this movie isn’t about story. It’s about telling as many jokes as possible and watching which ones work and which ones don’t. the jokes a slapstick and very much along the same lines as other zucker brothers films like The Naked Gun, Hot Shots, and Airplane. There are plenty of jokes that work, but they are all quick and forgetable in a way that doesn’t advance the plot or characters.

Top Secret is an okay movie. It’s certainly has a number of laughs, but they are all quick laughs, and none are especially hilarious or thought provoking. this is complete slapstick. the individual jokes might be creative, but they do nothing to add to either the plot or the characters. When you watch a Wes Anderson film, for example, even if the plot is weak, the jokes still add to the character and to presenting what a jerk that character usually tends to be. The joke in his movies is that his main character doesn’t realize he’s a jerk. In Top Secret, just like in other zucker brother’s films, there is no enhancement of either plot or character, with any of the jokes.

the zucker brothers are the guys who made Airplane, the Naked Gun, and Hot Shots. all three of those films went on to generate enough attention and box office appeal to warrant sequels. all three of them were also very similar. The storyline doesn’t really matter with these guys. It’s all about the gimmicks. and they are masters of slapstick humor, but without an evolving plot, the jokes are quickly and easily forgotten.

in Top Secret, the storyline is very simple. a popular singer is traveling through Europe during World War II and meets a beautiful woman. it turns out her father is a scientist who has been arrested by the Nazis. The singer, Nick Rivers (played by Val Kilmer in his first role), gets taken away by the Nazis as well, and finds himself in the same prison as the girl’s father.

This is about the halfway point of the film. nothing very original has happened, and there have been far too many musical numbers of rivers performing at this point. river meets the girl’s father and then escapes prison. He rejoins with the girl who introduces him to her friends in the resistance. They all agree to help bust her father out of prison and that leads us to the climax of the film.

This movie clearly isn’t about story. instead, it’s about telling a different joke every minute. That starts with the very beginning of the movie, when a spy is on a train having a fight with a bad guy as the train heads towards a tunnel. The spy who is facing the tunnel sees that his enemy, who has his back turned toward the tunnel, doesn’t realize that the tunnel is coming up. He also sees that the ceiling of the tunnel will crush the enemy. That’s when the enemy hits the tunnel and plows through it, as the tunnel crumbles all around him.

This is the kind of humor that is in this movie. Unpredictable ideas. taking what you expect to happen and doing the exact opposite. Very often it has to do with physical gags, such as this one. another gag has a guy in a house during a gunfight, trying to break through the glass with his gun. He hits the glass with it and the gun bends.

There are moments that don’t necessarily feel connected to the story, but involve other characters and spy situations. One of these comes early one when one spy, dressed in sunglasses and disguise, tries to give information to another spy. The disguised spy is dressed as a salesman and keeps giving the other guy things to put on or chew or try, just to keep the cover. Every time the guy does try one, it ends up exploding in his face or something like that. these are funny gags, even if they are also kind of dopey.

When Nick Rivers does try to escape prison the first time, it is right out of the gold rush or Sherlock Jr. or one of the many other silent slapstick films of Charlie Chaplin or Buster Keaton. Every door that rivers goes through just leads to a slide or a chute that sends him right back into the very same prison cell. This kind of joke worked in those early silent films, with the sped up motion and fast, goofy music, but here it is not quite the same. It’s maybe funny the first time, but when they try pulling the same gag over and over again, it only gets less funny each time.

While the plot is weak, it’s nice that all of the jokes deal with something that does fit in to whatever story they are trying to tell. during that same gun fight, where the guy is trying to smash through the window, Rivers actually is breaking the glass in the window, and it comes out like a tic tac toe game where every time he bends down, the enemy shoots out another glass panel. The enemies shots come out like as while rivers smashing through panels comes out like so. The scene is loaded with jokes, some more funny than others. When a grenade gets thrown inside the house, one guy jumps on top of it. That’s when everyone around him explodes and the guy on the grenade is just fine.

Top Secret exists as an exercise in slapstick and nothing more. the Zucker brothers have never been very big on plot, and that’s probably why their films were so dated. The last thing they had a hand in was some of the scary movie films, and those got progressively worse as they went on. I think the zucker brothers entered the series with film number three or four, when it was already well past its prime. As far as storytelling goes, the naked gun series was their only real attempt at telling a decent story, and as a result, it was their most successful series, spawning a trilogy from it. Top Secret is an okay movie, and for goofy fun that you don’t have to think about, it definitely does the trick.