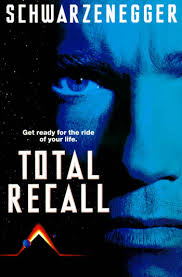 A fascinating action-thriller about life on another planet and a program that will let you become a spy just for a virtual reality-like vacation.

A movie that is truly wild with ideas, Total Recall takes us to another planet and doesn’t look back. It has the protagonist, Douglas Houser, go to a place called Rekal, that offer a virtal-realit-like vacation experience. Only it’s more than just being there when you are actually sitting down in a chair somewhere hooked into the machine. Here, at Rekal, you also have the option to choose who you are. That’s what gets Quaid into trouble as the machine actually opens back up memories that he suppressed, such as who he might have been and where he really belongs. This movie has an elaborte plot, but it also never takes inself too serious, and constantly remembers to have fun.

Total Recall is a terrific movie, just for its ideas alone. This film is based on a Phillip K. Dick short story, and he is probably the greatest author in science fiction of all time. With this movie, he has written the ideas of a man who goes to a place called Rekall, hoping to try a fantasy vacation, role-playing kind of deal, and ends up getting more than he bargained for. The movie is innovative and visionary in it’s atmosphere and environment, in ways that other films wouldn’t dare attempt. And this is all without getting into the actual story. It’s a movie about controlling air flow and surviving on the red planet, despite ongoing violent attacks by either the rebels or the enemy soldiers of an evil dictator, named Cohagen.

Paul Vehoven is the director, and that says a lot about how this movie came out so good. Verhoven is one of those guys from the eighties and nineties, who was making movies without holding anything back. He went for the hard R as often as possible, taking the action to some pretty heavy levels. Verhoven’s movies included Robocop, Starship Troopers, and Basic Instinct. He was a man with a vision, and really knew how to tell a story. Sometimes that vision took him too far, like when he made Showgirls. Verhoven was a cross between David Cronenberg from back then (The Fly) and Zack Snyder of today (Watchmen.) He certainly never went for a PG-13 sci-fi movie like some of our better sci-fi directors of today (Christopher Nolan and JJ Abrahms) tend to do.

Totaly Rekall begins with a man named Dennis Quaid (Arnold Schwartzengger) having dreams of Mars, and not being able to breath. His face gets puffy and ready to explode, and then he wakes up. His wife, Lori, isn’t too thrilled about all this. Especially not when Quaid keeps talking about going to Mars and trying to watch discussions about it on the news. While on a train, going to work one day, Quaid sees commercials advertising a place called Rekall, that specializes in implanting memories so that you feel like you just went on vacation. Even better than that, it gives you the opportunity to be anyone you want to be in this memory.

Quaid decides to go there and check it out. The questionaire process where he sits down with a representative and has to answer a series of multiple choice questions, is a lot of fun. It reminded me of the Game with Michael Douglas also going into a company, sitting down to subject himself to their tests, and having no idea what the whole thing was all about.  Here, the experience sounds incredible. You never have to leave your seat, and you end up feeling like you have been traveling for weeks.

Everything seems great until something goes wrong. Quaid freaks out and it all happens before the memories are even implanted. They wipe his memory clean and send him back home, only something has changed. Just going there and sitting down for that has awoken something that Quaid had forgotten all about. He has repressed memories of who he used to be, and suddenly they come back to life. It starts when his constuction worker friends try to kill him. The guy who he is closest with, Harry, tells Quaid that he was warned not to go to Rekall. Then, when he gets home, Quaid finds his wife is pretty much on the same page as Harry. When Quaid gets her talking, she reveals that his whole life, as he knows it, is fake. She has been planted there to keep a watch on him, and is not really his wife.

Now, just imagine this for a second. Imagine waking up and finding out that you are not really you. That all of your memories have been implanted and never actually happened. It’s a pretty genius idea. That and how Rekall works, are both pretty clever, and Quaid finds himself on the run from a group of men who come to the apartment looking for him. Quaid hops in a Johnny Cab, one of the many cool inventions of this movie. It’s a robotic taxi cab with a mechanized person driving. When he is called up and anonymously notified of a suitcase, Quaid opens it to find a video from himself, left at an earlier time, with instructions. The video tells him to get his ass to Mars, and that’s exactly what Quaid does.

We don’t get to see the plane or rocket or however Quaid does get there, exactly, but we see him at the station (probably the airport), having a freak out with the mask he’s wearing, which turns into a bomb. And then he is on Mars, trying to figure out where to start, when his wfie walks back into the room, along with a man who claims he is a doctor. The doctor tells Quaid that he is still at Rekall and that something went wrong. Lori insists that what the man is saying is true, and that she is there at Rekall, standing beside his chair, too. This scene is really cool and a lot like a choose your own adventure book or the taking of the the pill in The Matrix thing. If Quaid accepts what these people are telling him, then he probably goes back to his life with Lori. But if he refuses to believe it, than the secret agent persona he adapted with continue and he will remain on that path to find out what happens next. I also like this idea because it raises the question of whether or not this whole thing really is Quaid living the fantasy he signed up for. After all, the attacks by his construction worker friend and then by his wife, didn’t start until right after he got back from Rekall. Was that the start of his adventure experience?

In his moment of choice, with Quaid, Lori, and the Doctor at a standstill, Quaid chooses to believe the experience he is having is real. By doing so he eeps the secret agent adventure going. Quaid joins in with a girl he meets, named Miranda, who works with the rebels. These are the guys against Cohagen, who has total control of all the air supply. Cohagen wants Quaid for some reason, and neither one of them knows why. Is there some sort of information that he found out and wasn’t supposed to know?

The movie has great action and some really cool weapons and gadgets. This is a movie about the future and space travel and other planets, that really feels like it. Other movies about space and going to toher planet spend most of the movie at home, in America. They usually just bring a character back from space and have that character tell what happened while out there. Kind of like the movie Fire in the Sky, with a man named Travis getting kidnapped by aliens and only revealing what happened with them at the end, for one quick scene. Total Rekall is focussed on showing the planet.

The action is great too, in the usual eighties campy way that is more fun and goofy than serious or realistic. Here, characters jump through plate glass windows at free will. And it’s always shown in slow motion, with the sounds of glass shattering and then flying  everywhere. Despite this campiness, the action is enjoyable. That’s in large part due to the use of inventions, like a halogram watch. This movie has a wonderful virtual reality elemement to it and they even make sure to bring Rekall back for one more sene towards the end. This is a smart movie that gives us two bag guys. There’s Cohagen and then there’s Richter Lori’s husband (Michael Ironside.) There’s also a question raised about who the second Quaid, that keeps leaving messages for him, and calls himself Howser, actually is. This movie shares traits with some of the coolest mystery-thrillers, such as Primal Fear where a person might have been something else in a previous life, and then repressed it. Consider it Primal Fear meets the Game with a Mars futuristic setting. Total Recal is  fantastic film.