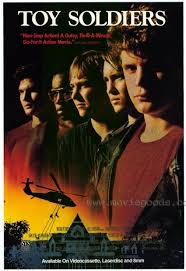 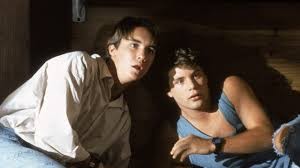 A pretty cool terrorist movie where the kids who are held hostage at the school are the heroes.

Toy Soldiers is an interesting mash up combination of movie genres. It’s the rebellious boys in a prep school genre mixed with a die-hard terrorist film. How somebody thought to mix these two things together is a real mystery unto itself, but the result is actually a pretty cool film. That’s because both parts of the movie work well on their own and when combined, they end up being a lot of fun. Instead of police officers or soldiers running around the school trying to stop the terrorists, it’s the high school students. Unrealistic, sure. But enjoyable non-the-less.

The movie begins with the terrorists and the reasons why they are so upset. The leader of the group, Luis Cali, has a father who has been found guilty by a judge in his homeland, and has now been shipped over to the United States. It is in America that he will now be imprisoned. Cali first tries to get the judge to reverse his decision, not realizing that his father has already been shipped out of the country. When he does learn this, he throws the judge out of the helicopter.

It’s an unusual move, starting the movie with the terrorists and not the heroes or protagonists, but it works well here by giving us a sense of what’s coming. From there we go to the prep school where we watch a group of mischievous students run by the campus security guard, steal his baton, and distract him. This is all to get him away from the kids who are spray painting “reject” over the school welcome sign.

These kids will be our stars. They are not the best behaved or the nicest kids in the school, and that’s exactly why they are the ones who would stand up to the terrorists. The head of the group is Billy Tepper, played by a young Sean Astin in the best role of his career. Astin of course went on to play Rudy and then Samwise Gamgee in the lord of the rings movies, but it was toy soldiers that really made him the cool kid in town. And he pulled it off nicely.

Aside from the spray-painting prank, the boys have a couple of other things up their sleeves as well. They sneak into the basement late one night and find a way to tap into the phone line using a device that Tepper made, and to call up a 1900 erotic hotline. The boys have fun with this up until the moment they get caught. That’s when we learn of another scam they have going, filling bottles of mouthwash with peppermint flavored vodka and then selling it to some of the other students in the school. The mouthwash bottles help the inside contents go unnoticed. But it doesn’t work and Tepper is again caught.

The guy who catches him is dean parker, the head of the school, played by Louis Gossett Junior. Like Astin, he is perfect in the role, and like him this was one of the best roles of his career. For Astin, the other one was Rudy. For Gossett Junior, it was an officer and a gentleman. And here, in toy soldiers, he matches Astin for wits and authority. When Astin’s forced to go to each room he sold the bottles too and collect them back to give to the dean, he takes it personally and begins planning his next prank. That follow up revenge prank is a moving of all of the furniture of the headmaster out into the courtyard. And all of it is placed exactly the way it was setup in the office.

With so much fun between the dean and the students and all of these ongoing pranks, we almost forget about the terrorists all together. And then they show up at the school. They have a good reason for being there, since the son of the man who will be deciding this terrorist’s father’s fate, attends the school. Only the FBI gets wind that something might happen and has the boy taken out of the school and put into protective custody.

That would probably be enough to end the terrorist’s plan right there, but for these guys, when they learn that every student in the school has a powerful father in the business world, they decide to stay there and hold these kids hostages. I’m not sure I believe it, but if we go with it, then the road up ahead is pretty cool. The kids slowly start to work out plans for escape and for helping the army, which is stationed outside.

One thing I really like am that everything happens slowly. The kids don’t just run at the terrorists and start attacking, but decide that they need to learn everything they can about these guys, and so they start volunteering for jobs where they can get close to the terrorists and write down what they observe. Jobs like bringing these guys their food from the cafeteria. There’s a great scene a little more than half way into the picture, where Billy decides he has enough Intel to bring to the authorities and makes an escape out of the school and into army base territory. Only he’s just dropping info off and has to fight just to get away from the army and back to the school again when he’s done.

The action in this movie is nothing special and that’s one of the problems with the film. It’s nothing major, because we are certainly kept interested at all times, but it could have been better. Another is that there is not a big enough body count. I believe only two people die at the school once the terrorists take over, one a teacher, the other a student. The student death, however, is a major plot point and handled really well. He’s a major character and the events that lead to his death have a lot of merit to them. There are definitely problems with this movie, but most of them are pretty small. There are open ends that aren’t followed up on, like a mob figure saying it’s time for the terrorists to feel some pain, before we never see the mob figure again. Despite these minor problems, t for the movie works. It’s a different take on the same kind of story that usually works pans out. Toy Soldiers are not exception.