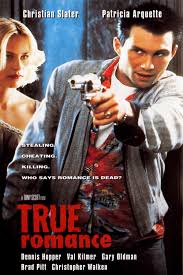 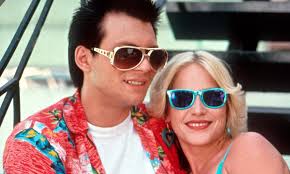 A fun and violent guilty pleasure of a movie where a simple man with brass balls takes on both drug dealing pimps and the mob.

True Romance is Tarantino before he became Tarantino. The greatest crime writer / director in cinema of the nineties and on, and this was his warm-up. He didn’t direct the movie, Tony Scott did, but Tarantino wrote the script and that seems very obvious every step of the way as you watch it. The movie is not quite as good as the usual Quentin Tarantino movie because it doesn’t have the same level of creativity and style. But that’s okay. Quentin had made reservoir dogs before this movie. True romance came out in 1993, right in between reservoir dogs (1992) and pulp fiction (1994), and so one has to wonder if Tarantino could have directed this movie if he wanted to. And it seems like he didn’t want to. He knew that this script didn’t have as much opportunity to get artistic and creative as his other ideas. And so he focused his energy on pulp fiction. And thank god he did.

But True Romance is still pretty good; it’s like taking the usual Tarantino film and stripping it down to the bare bones. And then you have what’s left as a movie about a very simple man who works in a comic book store and loves kung fu. One might say that the hero of this movie, Clarence (played by Christian Slater), was modeled after Tarantino himself. Especially when Clarence goes to a movie theater by himself to see three kung fu movies in a row, billed as a midnight special feature.

When he meets a girl, Alabama (Patricia Arquette), who is a call girl hired to sleep with him, Clarence decides there’s something special about her that just might be worth fighting for. And so he goes to see her pimp (the very diverse Gary Old man), and tell the guy that Alabama is through working for him. Clarence brings a gun along and he even has the balls to give the pimp an envelope as a parting ways offer that is filled with nothing at all. Naturally the guys attack him and Clarence luckily manages to shoot his way out to freedom. He grabs what he thinks is a suitcase of Alabama’s things on his way out. Turns out it’s a suitcase filled with cocaine.

Clarence and Alabama now drive to Los Angels where Clarence has an old college friend who is now a struggling actor (Michael Rapp port). He and Alabama hook up with him, meet his stoner roommate, Floyd (a memorable, but brief Brad Pitt), and go through him to organize a buyer for the cocaine. The middleman on the deal is Bronson Pinchot (Balcie from perfect strangers), who sets up his boss, a big time Hollywood producer, to meet these guys.

But before the meeting, Clarence goes to see his father (Dennis Hopper), and then his father gets a visit from the men who are after Clarence. They all work for Christopher Walken, and when Walken enters the room and sits down with Hopper, it’s the greatest scene in the movie. These two guys are among the greatest villain actors of all time. And here they are, sitting down together for a conversation and even a little history lesson. Dennis Hopper delivers a hell of a monologue about how the Moore’s conquered the people from Sicily, and it’s not so much the history that’s important here, but what he’s trying to do with it. He’s trying to hurt Walken, but telling an insulting story about Walken’s ancestors. Hopper knows that he’s a dead man, but his last move before going to the grave can at least be to hurt this guy a little bit with some real facts about his family. When Hopper brings up Walken’s grandmother, it’s a stroke of genius.

Unfortunately there aren’t any other scenes in the movie that are written or acted as well as this one. Christopher Walken is wonderful at delivering, or being a part of Tarantino monologues. He only had one scene in Pulp Fiction, where he delivered a monologue about a watch to a young Butch. It was an absolutely fantastic and hilarious scene. Here, again working from a Tarantino script, his one scene is extremely memorable. It is Hopper who delivers the monologue here and not Walken, but the scene is remembered as belonging to Walken since it is the actor’s only scene in the movie.

James Gandolfini also gets only one real scene. He’s in the background here and there, like in the Walken scene, but he only talks and really acts in one scene of the movie. It’s a brutal fight scene between he and Alabama. He’s sent there, into her hotel room, to find the drugs and then kill her. And he does a lot of throwing her around before he can find them. The scene becomes more than the usual guy beating up a girl scene because of the way Alabama toys with him and laughs at him. She doesn’t play a helpless victim, but a girl who almost doesn’t care if he kills her (kind of like Dennis Hopper in the Walken scene). Alabama laughs at Gandolfini and basically gets him laughing too, and it’s a very strange scene.

By the end we get a final climactic showdown where every party you could possibly imagine shows up in this one giant hotel room. Tony Scott is known for ending his movies with scenes like this, from enemy of the state to domino. But True Romance was his first, biggest, and best end of movie standoff scene. The highlight of the scene isn’t so much the action, but more of a surprise at seeing how many different people shows up. And Walken is nowhere in sight. That’s very intentional. Him only being in one scene ends up giving that single scene so much more weight.

Speaking of only having actors in one scene, this movie actually tends to do that a lot. There’s a stellar cast involved in this film and many of the actors really just have one scene or one quick moment to make their role memorable. There’s Samuel L. Jackson and Val Kilmer in very small roles that are almost likes quick flashes. Then there’s Brad Pit, who never gets off the couch, and Gary Oldman’s pimp, whose death represents the turning point event that really sets the story in motion. Even the actors who play the cops are some pretty big known actors. Chris Penn and Michael Madsen.

True romance has been described as a sort of comic book nerd’s wet dream. It’s certainly not a realistic movie, but kind of like fantasy meets the underground crime world. The story isn’t anything spectacular, but what’s so appealing about it is that it really is very simple. Christian Slater isn’t a great actor and he really only worked for about two decades, the eighties and nineties. After that people kind of got tired of him. Still, he did make a handful of memorable movies and true romance is probably the best of them. He isn’t the kind of actor you could watch in anything, but for this movie he is just right. Kind of like how Keanu Reeves was right for point break or speed. True romance isn’t a great movie, but it is violent, entertaining, and a lot of fun.