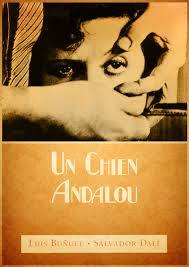 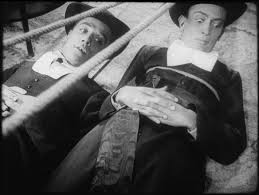 A very strange and artistic short film where putting the story together, based on the images, becomes the fun of the movie.

This is is a very trippy and out there short film. Imagine the kind of movie that David Lynch (Blue Velvet) probably took his inspiration from. There are images that feel like dream sequences (perhaps because they came from the dreams of the filmmakers,) and it is the job of the audience to make sense of it all. Luckily,  this can be done. The pieces do add up, but it’s a bit of a challenge to get them all to fit together.

Luis Bunuel and Salvador Dali found each other in Paris in the 1920s and decided to make a movie together. For Bunuel, it was his first movie, in what would become a promising career (The Exterminating Angel, Belle De Jour.) for Dali, it was the first time the famous artist (the paintings of the melting clocks), would get to put his images on screen. Both men were Spaniards who had come to Paris because it was a place where their artistic abilities might be recognized. Both men were foreigners in a strange land, and both were surrealists.

Un Chien Andalou came about when Bunuel told Dali about a dream he had where a cloud sliced right through the moon like a razor slicing through an eyeball. Dali loved it, and then told Bunuel about a bizarre dream that he also had. In Dali’s dream, a man’s hand had a hole in it, and ants were rapidly crawling out of the hole. To say these guys were strange is an understatement. Most of us can barely remember our dreams, and if we do, we remember the parts that made sense, not the crazy, unexplainable images.

But these guys were different. They were the kinds of guys who wrote down their dreams and wanted to see them again, on film. And so together they wrote UN Chien Andalou, with Bunuel directing. The two of them say that the movie was not intended to make sense or to follow a plot. They say that the only requirement for their ideas was that none of them were logistical in any way. I don’t buy it. I think there is a plot here, at least in the first half, and then after that, maybe they get a little carried away, before coming back to a plot for the ending.

The movie is about 15 minutes long in all. It’s a short, and probably the most famous short in the history of film. It opens with the man slicing a woman’s eye with a razor blade, which is the most iconic image of the movie. We meet the man right away, as the movie opens and he is sharpening his razor blade. Then he’s standing behind a woman, slicing her eye, as we also see a cloud slicing through the moon. The curious thing is that the woman just sits perfectly still and allows it.

Next we get a title card that tells us it is about 8 years later. We see another woman (or is it the same woman?) standing by her apartment window, watching a man dressed in a nun’s outfit, riding a bicycle down the street. The man falls on the bike and the woman brings him up to her apartment, where she takes care of him. I believe that this is the same woman from the opening of the movie, with a recovered eye. In just moments the man will turn into a bit of a psycho, and I think the idea is that this woman is attracted to weird and demented men, which is why she let the first guy slice through her eye.

Another idea is that maybe it’s not the woman who is the same, but the guy. He was a psycho at the start of the movie, slicing through a woman’s eye, and he will now turn out to be a psycho again. All of this comes when he and the woman are staring out the window at a crowd that is gathered around a severed hand (reminiscent of the severed ear found in a field in David Lynch’s movie Blue Velvet.) the hand is put into a box and given to a woman who stands nearby, probably the widow of the man it belonged to.

The widow now stands in the middle of a crowded intersection with the box and is promptly run over and killed. The man and woman of the apartment watch all of this from their window, and suddenly the man goes off. He is turned on by the violence and the death, and he suddenly makes sexual advances at the woman, chasing her around and the room and trying to molest her. When she refuses his advances and even raises a weapon at him, he goes over to a corner and starts pulling a piano around the room with a dead donkey on it. Underneath the pianos are tied up priests. I think the idea here is that since this woman has found out his dirty little secret, that he is a nutcase, he might as well show her just how crazy he really is.

Unfortunately, this is where the possible rationality of the movie ends and the really crazy begins. The movie now flashes back in time to sixteen years ago and another character shows up at the apartment and fires a gun at the man. Then we flash to the woods where a dead body appears and people crowd around it. All of this happens suddenly and with little to no explanation at all.

By the end of the movie, we are back with the woman of the apartment. There have been plenty of images that didn’t make sense, like the man making her armpit hair disappear and then suddenly growing a mustache and beard on his face. But now the ending comes before us as the woman runs away from this man and finds a different guy on the beach. This second man is much more normal and everything seems fine until we get a title card that brings us to the spring. There is one final image that shows us that things were not really fine at all. It is an intense image to end on, leaving us with all kinds of theories to ponder. Did the new guy turn out to be crazy too, or did the old guy just catch up with them?

Un Chien Andalou wanted to offend people, and to the amazement of the writers, it didn’t. Instead, it was embraced. The writers claimed that they had stones in their pockets at the first screening so that they could throw them at the audience if the audience got so worked up after the movie that they attacked the filmmakers. I think these filmmakers are storytellers and illusionists and that little of what they say is actually true. Especially when they say that the movie has no meaning and no story and was never meant to make any sense. I think that most of it actually does make sense, and that the story is pretty interesting. Of course, it’s not really all that complicated or creative. A woman takes in a crazy guy and he turns out to be crazy. The woman is attracted to bad guys, and so she is with a guy who slices her eye in the beginning, a guy who tries to molest her in the middle, and a guy who ends up being deadly by the end. The plot may be simple in the long run, but the way it all unfolds is pretty cool.