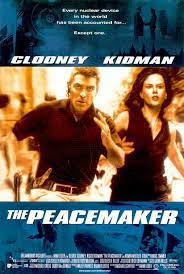 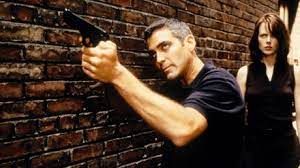 A pretty decent terrorist action movie, this one isn’t that different than other movies in the genre that have come both before and after it, but the star studded cast help elevate it to a higher level than most of these films.

The Peacemaker was the first movie ever put out by Dreamworks Studios, the company that was the brainchild of three powerful Hollywood players coming together… Steven Spielberg, David Geffen, and Jeffrey Katzenberg. (SKG,) It’s a bit odd that of all the movies they could have made to be their very first one, and to essentially launch the studio, that this is what they chose. After all, it’s little more than a standard terrorist movie featuring high caliber casting and movie stars. But the fact that it was the first really just tells you something about the time we were living in, back at the end of the nineties (1997,) and what kinds of movies were popular. After all, the only reason to make a movie like this first, which by no means stretches the muscles of creativity, would be because it seemed like a safe bet.

The movie stars George Clooney and Nicolle Kidman, two actors who were at the top of their game back then, but have only continued to rise in ability, popularity, and superstardom, ever since. For Clooney, it was one of his first movies, and yet he was already a proven star. Just two years earlier, he hit the silver screens for the first time with From Dusk Till Dawn, and he had already graduated all the way up to playing Batman (made the same year as this movie, in what is commonly regarded as the worst Batman movie ever made.) But Clooney was a rising star, and Kidman was already pretty established, and together they were like a Hollywood IT couple on screen, not unlike when Clooney teamed up with Julia Roberts for the Oceans movies.

But despite the casting, and the fact that these two actors are still just as relevant today as they were back then, the movie is still pretty generic. Now, that’s not to say that it’s bad. It is actually exciting and interesting. But it isn’t exactly creative, fresh, or different. At times this movie feels like a cross between The Rock and Die Hard, which is to say there are whole sequences and music which feel lifted from The Rock (the opening train heist being very similar to the stealing of chemical weapons at the start of that movie, complete with nearly identical music by a man who was the same composer of both films, Hans Zimmer. And then there’s the Die Hard element, where this idea that a train blew up with nuclear weapons on board so that people would think the weapons were also destroyed, when really they were taken off the train before the explosion, feels right out of Die Hard, where villains make it look like they died or their money was destroyed, only to secretly get away with still having it.

The movie opens with that lengthy train sequence, and it’s a great one including Russian military on board a train, with these weapons on it, and the soldiers expecting an easy and laid back ride, as most of them fall asleep. That’s when armed assassins show up in the shadows with all black body suits and masks that feature red eyes, as they aim the laser pointers of their guns at these Russian soldiers. There’s a great shot where you see all the laser pointers lined up in the room, with the sleeping Russian soldiers having no idea what’s about to happen. And then the execution happens, followed by a massive explosion.

From there, we are in Washington D.C. as the president is getting briefed about what happened with this train in Russia, and Julia Kelly (Nicole Kidman) is running down the hall trying to catch up with the entourage and deliver the news. She’s the smartest person in the room, or so she thinks, until we meet Thomas Davoe (Clooney.) Kelly holds a conference to debrief US military strategists on what’s going on, and that’s when Davoe steps up and takes center spotlight. He has noticed something in the photos that no one else seems to be picking up on. During the moments right before the collision of two trains, which led to the bomb going off, in the photos, you can clearly see a bunch of people jumping off the passenger train. But when you look at the military train, which it collides with head first, you see that there isn’t a single person jumping off. Davoe’s theory is that on the Russian train, the soldiers were already all dead. This was a hijacking, not an accident. Nine nuclear weapons have gone missing.

At this point Kelly and Davoe look at the list of names of people who were on the train and killed. One is a well-known Russian general names Kotorov. Davoe knows people who are keeping tabs on Kotorov. He tries calling his friend in Russia, but gets no answers. He then Goes to a second source…a  man doing intel in the states, and learns of the Kotorov’s mistress, who is still receiving flowers every day… the General is not really dead. Kelly and Davoe now know who they are after. Kotorov is not the one who will use the weapons, but he’s the supplier or the middle man, and if they can find him, they can find the weapons regardless of who they are for.

This brings them to a a man who supplies trucks to move illegal material in Russia. Davoe tries to bribe this man, but when it doesn’t work, they tie him to a chair and threaten him. They use this to get his password and download information on the Truck. And then we get a car chase and action scene through the streets, where the laptop with the downloaded file and information is destroyed. Only it doesn’t really matter because Kelly already emailed herself the information. They use this along with satellites to find the truck, which is in a convoy of other trucks when they locate it. And that leads to them shutting down the streets, attacking the truck, and getting all but one of the nuclear weapons. One of the terrorists got off the truck with a single nuclear weapon before the truck was attacked.

This terrorist meets up with his friends, two other guys who we have seen throughout the movie, but still don’t know very well at all. There’s the one guy who gives piano lessons to little kids and is apparently the mastermind behind this whole thing. And then there’s his number two guy who assassinated someone at the start of the film. It’s always nice when a movie has multiple villains that are all connected to each other, (Batman Begins is a perfect example of this with Carmine Falcone leading to the Scarecrow leading to the League of Shadows.) But here in the Peacemaker, most of these villains are nameless, forgettable characters. The one exception is Kodorov, and how we are tracking him for most of the movie, until something happens to him and our focus then turns to a new villain.

The Peacemaker is an okay movie. Clooney and Kidman are a solid team and both deliver with getting us interested and getting us to care about the situations. But the movie itself isn’t all that different than other terrorist films that came before this. In the same way that Die Hard: With A Vengeance was originally written as its own movie, called Simon Says, and not connected to Die Hard at all, you can imagine that the plot of this movie could have easily been used for a Die Hard film. Or a Jack Ryan CIA film, Which is to say that there’s nothing really unique about this one. Even the director, Mimi Leader, turned out to be a generic filmmaker (she made Deep Impact at the same time as Michael Bay was making Armorgeddon, and while Bay isn’t exactly a good filmmaker, he definitely is memorable and has his own style.) The Peacemaker is one of those movies that does hold up, but just barely. It’s a fine film, but it is far from anything special.