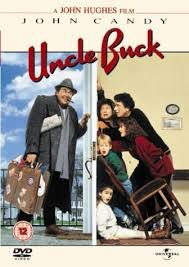 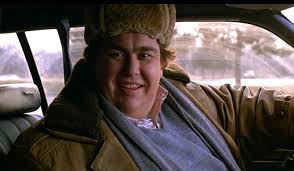 A fun, light-hearted eighties comedy about an unusual uncle who has to take care of some kids for a week.

Uncle Buck is one of those eighties movies that is pure light-comedy and family fun. It’s the movie about a strange uncle taking care of some kids. Two of the kids are young, and Buck only gets a handful of good scenes with them (Macauly Culkin steals the show in two scenes where he interviews adults.) For Buck, it’s the scenes with the older daughter that really work. She’s a rebel and hates Buck, and he’s out to help her stop being so down, whether she wants the help or not. The movie isn’t great, and there are no fantastic laughs, but overall it is definitely enjoyable and cute.

Uncle Buck is a movie about a strange Uncle that goes to stay with a family because he is basically their last resort. As played by john candy, Buck is definitely odd, but he is nothing truly crazy or that warrants being much more than just eccentric. If made today, this character would be much further off the deep end, and more of a candidate for a looney asylum. But in this eighties John Hughes, family-friendly film, everything is light-hearted and sentimental. Still, the film has plenty of laughs, and is definitely worthwhile, for it’s time capsule spirit as much as anything else.

Hughes, of course, is the guy who made all those eighties teenage comedies, from the breakfast club to Ferris Beuler’s Day Off, to Sixteen Candles. It was after those films that he started working with candy, making movies like planes, trains, and automobiles and this. He then went on to make home alone, starring Macaulay Culkin (featured as one of the main kids in this film), with a small appearance by candy.

In uncle Buck, we meet the family before we meet the protagonist. The movie opens on the kids, watching the older sister take care of her two siblings and the insults that they all throw at each other. From there, we meet Buck at a bar, where he sits talking to his girlfriend, Chanice (Amy Madigan) about going to work for her the next day. She isn’t too confident that he’s going to make it in, but he assures her that there is nothing to worry about.

That night is when he gets the call from his brother. He and his wife have a family emergency where the wife’s father has suddenly gotten deathly sick, and the two of them need to go and see him. They have tried everyone they can think of to come and watch the kids, but have had no success. That’s what made them turn to Buck. They tell him that he can come and stay at their house and watch them for a coupe of days and they will be extremely grateful. So begins the main plotline of the film.

There are three kids in the family, who Buck is now in charge of. There’s the young boy, Miles (Caulkin), his younger sister, Maizy, and then the teenage sister and oldest of the bunch, Tia. She’s the one who gives Buck the hardest time during the course of the film. It’s apparent very quickly that the younger siblings don’t know Buck very much at all, and in fact, when miles first meet him, he sits Buck down for a rapid-fire interview. This scene, with Buck taking the questions very seriously and answering every one of them at the same pace that they are asked, is fantastic. It’s one of those scenes that were clearly the inspiration for home alone.

Buck starts driving the kids to school each morning, and it is tia who is incredibly embarrassed to be seen getting out of his car. That’s because Buck’s car is incredibly beat up and old and makes a giant popping sound when it starts up that sounds like a gunshot. Every time this happens, whoever is standing nearby ducks, as if they think it’s a gun going off. Tia tells him that she’ll get her own ride home and Buck threatens the ways he will come into the school and embarrass her even more if she isn’t there when he comes to pick her up.

Back at home; Buck has some fun with the kids. For mile’s birthday, he makes some gigantic pancakes, the size of miles, himself. Then he hires a clown and when that clown shows up to the house drunk, Buck punches him out. I was kind of hoping for a scene where Buck replaced the clown and acted the part himself, Steve Martin-Parenthood style, but that never happened.

What does happen is we get a subplot involving the female neighbor next door. She comes over one day, not knowing Buck is living there, and quickly falls in love with him. There are some funny moments to this storyline, and also some dopey ones. The scene where she overhears him talking to the laundry machine and thinks he’s having sex with someone is pretty funny, but then again, we’ve seen this exact kind of thing over and over before. An example is Austin Powers, when he’s in the bathroom stall and tom Arnold is in he next stall thinking Austin’s having bathroom trouble.

The movie brings in the Chanice character much more heavily in the second half. That’s because Tia gets word to chance about what’s going on between Buck and the neighbor, and Chanice decides she has to see it for herself. Meanwhile, Buck has some climactic scenes with tia, such as when he goes to a party looking for and ends up finding her out on the street.

The movie is good, but it is far from great. That’s because it is devoid of any laugh out loud moments that are just unforgettable. Everything in here feels very familiar. That includes the way things get wrapped up so neatly at the end and tia and Buck end up becoming the closer to each other than any other two characters in the film. This movie is definitely enjoyable, but it could have used a little more edge and a sharper conclusion.