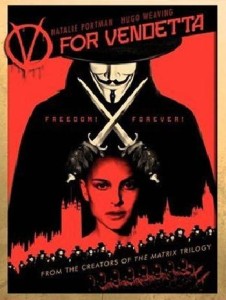 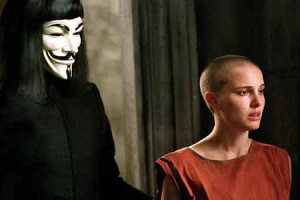 A smart and exciting take on the Fahrenheit 451 story, where one man wages a war against a corrupt futuristic society.

V For Vendetta is a corrupt society, one man against an organization kind of movie. It’s a conspiracy tale where the savior is basically a superhero, complete with mask and cape, and the action seems straight out of a comic book. And yet the story itself is much darker and more disturbing than most comic book based films. It’s actually based on a graphic novel, which sheds some light on why the movie is so serious and complex. And the plot of both the movie and graphic novel is a basic retelling of Fahrenheit 451.

By that, I mean it is about a political establishment where things are outlawed, banned, and even burned. A situation where the people don’t really have rights, but instead find themselves living according to the rules that are dictated by the politician, in this case a man named Adam Sutler, played by the great english actor, John Hurt.

V is the name of the hero who wages a one man war on this politician and his many armed forces, starting with the finger-men, who are like policemen that roam the streets, making sure a curfew is followed. they try to have their way with natalie portman’s evie, and v shows up to save the day. then he brings evie to the rooftop of a building to watch as another building, the old bailey, is blown up to the sight of fireworks and blaring tunes of a great symphony.

The next day, v shows up at the television station where evie works and has a little action scene with the guards who attack him. but mostly he’s just there to get his tape played on the air in which he announces that one year from now he will return to blow up parliament. Sounds like he’s a terrorist, but no matter. Evie helps him out of a jam at the studio and v knows the police will have her actions on the security camera and come after her. so he takes her to his home instead, a secret underground lair that seems like abandoned subway tunnels turned into a nice, well-lit, and spacious, apartment.

While v and evie get to know each other a little and start eating breakfast together and watching movies with each other, a police detective starts an investigation about a closed and burned downed facility. It begins when a lude talk show host is murdered by v and the police detective (played by the great stephen rhea), learns that the talk show host used to be a security guard at the facility.

Next is a priest who has a thing for young girls. evie helps out by dressing as a little school girl to get the priest’s attention, and v shows up, busting through the glass window and kills him. apparently the priest resided over larkhill (the facility), as well.

Finally there is a woman scientist, who is regretful because of what they did, but it’s not good enough to save her life. apparently they did horrible experiments on people where most of the test subjects died. Piles of burned bodies are shown and it is meant to be reminiscent of the holocaust, as some of the worst and most disturbing examples of evil that human beings are capable of.

Similarly, as if taking a page from anne frank’s diary, there are scenes where mcgreedy (sutler’s head of security) and his men break into homes and throw black bags over the heads of whoever they want to imprison and then drag them away. we see this happen on two occasions, first in a flashback to how evie’s parents were taken away and after that, it’s her friend the comical talk show host, gordon. he makes fun of sutler on his show and is killed for it almost immediately after.

In the end, v does show up to carry out his plan, and we get our first and only real action scene of the movie as he hurls knives at his enemies and we watch as blurry lines of movement carry the weapons through the air. the movement lines are a nice touch, and they look terrific. it’s a shame there isn’t more action in this movie, but at it’s heart, it is more of a drama and conspiracy uncovering mystery than an action movie.

the movie was made by james mctiege, the director of photography from the matrix films. It was the first movie that he made as a directory himself, his breakout as an individual. The wachowski brothers of the matrix movies both wrote and produced the movie for him. And despite a plot that draws from other stories, the movie came out pretty well. as far as the Fahrenheit 451 plot line, another movie did it even better just few years earlier than this. that movie was equilibrium, with a weaker story, but some truly fantastic action and very creative ideas about the future. V For Vendetta has a lot going on for it, maybe even too much, but it tells a complete story from one November 5th to another. To make that story complete and to make it feel like a real year, the filmmakers have to pull out all the stops, including a transformation of the evie character that includes her having the fear literally tortured out of her (as well as her hair shaven off). and then there’s a small subplot about a woman who was a prisoner at the lark hill facility and wrote about it. But at the end of the day, this is a story about man vs society and how one man stood up and got others to follow. It’s a pretty cool movie and it’s the film that launched james mctiegue as a filmmaker worth noticing.