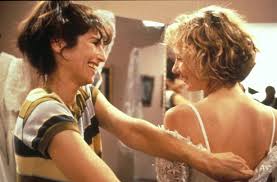 An enjoyable and sometimes powerful comedy about female friendship, dating, and neuroticism.

If Woody Allen made a comedy with a female as the lead (and he kind of did with Vicky, Christina, Barcelona, except for that movie wasn’t entirely a comedy), it would be walking and talking. Catherine keener, in this movie, is so nervous and uncertain of herself that she would be right in place in one of those films. Only she does not babble and stumble over her words and have crazy fears of ridiculously paranoid things that way Allen’s characters do. Instead, she just complains to her longtime friend, Anne Heche, about why things are not going right for her and how she cannot understand men.

The movie is not only about Keener’s character, Amelia, and her problems, but it is also and almost equally about her friend Laura (Heche). Laura is in a long-term relationship with a nice guy jewelry designer and is on the verge of taking their relationship to the next level. The only problem is, she is not sure what that next level is. Is it trying out new sex positions and changing their routines or is it being engaged and planning a wedding by the side of a lake, despite having mixed feelings about everything.

Both girls suffer from romantic uncertainty. Laura is a psychiatrist who fantasizes about some of her patients and goes to coffee shops to flirt with the waiters. It is not that she would ever act on any of these impulses, but she likes straddling the line of risk and flirting with the possibility. That is why she goes to see the play of the coffee shop waiter and stays afterwards to talk to him about it, all the while, not telling her boyfriend a single thing about where she is.

Amelia’s problems are equally bad if not worse. A video store clerk played by the very funny Kevin Corrigan asks her out. Only she thinks he is ugly and tells Laura that and does not think she could ever give him a serious chance. Then one day she does. She says what the hell and accepts his invitation to see a freak show movie, and the scene at the theater is hilarious. We just see her covering her eyes with the sounds of torturous screams filling the air and Corrigan next to her enjoying every second of it.

She sees him again, this time for a freak mask / horror movie convention, and by the end finds herself back at her apartment sleeping with him. That is when the notorious message is left on her answering machine, calling him out. Let us just say he was never meant to hear it and now refuses to see her again.

Therefore, Amelia finds herself wondering why this guy will not return any of her calls and wanting him even more because of it. She stalks him, watching him through the window of the video store and following him through the streets as he leaves work one night. Amelia is devastated because she thought this guy was so much lower on the food chain than she was and now suddenly he is too good for her.

She starts spending more time with her good friend and ex-boyfriend, Liev Schreiber. This guy is a great actor who has really made a name for him in the past ten years or so. There’s a reason why he’s the only one to make it big from the Scream movies whereas other actors, like Courtney Cox had a huge head start over him before, with her super popular TV show Friends. However, talent and the ability to choose good roles are what it is all about and Schreiber has them both.

His character, Andrew, has his own things going on. He has a father who is losing his memory and repeats the same things repeatedly, a mother who drives him nuts, and a woman friend who he spends hours on the phone talking dirty to on a daily basis. He spends so much time on the phone with her that the phone company is trying to disconnect his service.

Andrew might make stupid choices, like that, but he is a nice guy at heart and really enjoys the honesty and playful banter he has with Amelia. When she asks him why he broke up with her, he hesitates to tell her at first, but then is honest, letting it all out. Later on, when Laura’s boyfriend asks Amelia what went wrong between her and Andrew, she puts what Andrew told her into perspective and narrows it down to a single incident involving a new pair of pants. This is smart and creative stuff.

The movie might feature women as the leads, but it is some of the men in this movie who give it a major boost. Both Schreiber and Kevin Corrigan as a weirdo (not that far off from his role of goon in Buffalo 66) are a lot of fun, and Keener, as the lead is a character that is very easy to sympathize with and relate to. In addition, while all three of those actors are a part of her story, we have everything going on with Laura and her boyfriend turned fiancé, to follow as a side plot. The movie is not especially hilarious or anything (although Kevin Corrigan’s scenes are usually pretty funny), but it is smart and entertaining and feels like a new take on the dating genre. It is enjoyable stuff.