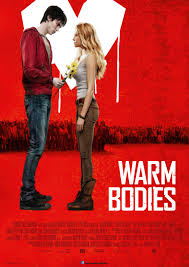 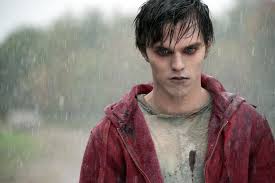 A fun zombie comedy, that starts out pretty cool, but gets kind of routine as it goes on.

It’s Zombieland mixed with twilight and the result is only somewhat entertaining. This movie starts out fun with voice-over and a new take on the genre that has a zombie fall in love with a human and actually start to change back into normal. It’s something different, but the longer it goes on, the more it starts feeling the same. The movie is definitely entertaining, but it needed to stay original and fresh the whole way through, and couldn’t quite pull that off.

Warm Bodies is an okay zombie movie. The positive, of course, is that it’s trying something different with the genre. This is a movie that breaks all usual barriers and actually features a romance between a zombie and a human. The negative is that long before the end of the film, we have forgotten about the original points and the movie has become generic and predictable. Still, it deserves a lot of credit for its premise and creative approach alone.

You can see where the progression of the genre and popularity over time would have led to something like this. First there were serious zombie horror movies (like Night Of The Living Dead and Dawn Of The Dead). Then there were zombie comedies (Shaun of the Dead, Zombieland.) Then there were vampire romances where the creatures started getting it on with humans (True Blood, Twilight), and now we get an attempt at being all of these things at once, with vampires swapped out for zombies. But this is definitely a comedy, as opposed to a dramatic romance, and so it really throws everything together and hopes for the best.

What makes the movie work is its use of voice-over. From the very first scenes, we meet r (Nicholas hoult) wandering around an airport, surrounded by other zombies, and hear his inner thoughts. He’s able to explain to us what he’s doing and what all the other zombies around him are up to, as best as he can. And most of it is pretty funny, simply because of how ridiculous it all is (what these creatures are doing), and how r knows that it is ridiculous and comments on that.

R explains to us the world that these creatures now live in, and jokes around about who some of the zombies he passes are and what they probably did back when they were humans. There are zombie security guards, zombie janitors, and even zombie rich sons of corporate C.E.O.s At one point r goes over to a bar in the airport lounge and pulls up a seat next to his best friend. This is m, played by Rob Corddry, and the two of them do little more than grunt at each other. R explains that this is the way they communicate.

On the other side of this world, that has now become the future, there are the humans. The main character here is Julie (Teresa palmer), the daughter of a man who is the leader of the resistance, fighting against the zombies. That man is grigio, played by the great john malkovich. Only he’s not so great here. Maybe that’s because his role is so clichéd. Even having her be the daughter of the leader of the resistance is clichéd, considering she will fall in love with a zombie and her father hates zombies more than anyone.

If this movie had sidestepped the usual storylines, like, “remember what the zombies did to your mother?” things would have been a lot more interesting. Still, the malkovich character aside (and boy does having him be the leader of the enemy group make it feel like a forced attempt at Romeo and Juliet), most things in the first half of the movie work. I really like that r eats Julie’s boyfriend (played by Dave Franco), and takes on all of his memories. That’s the supposed reason why r falls so hard for her. And instead of going the formulaic route and having that be a secret, which Julie only finds out about at the end, this movie deals with it in the middle and doesn’t make such a big thing out of it.

Early on in the movie, while r is walking around the airport, he notices and comments on some monster zombies. These are creatures that have gotten so tired of living that they pulled off their own skin and are now basically glorified skeletons. The creatures have no personality. You can tell that by the end of the movie, they will be the bad guys, as they kind of look like the zombie / vampire creatures in I are legend.

Other than the voice-over comedy, the other thing to like about this movie is the romance. It takes time for Julie to trust r, and that’s a good thing, because she has to feel that being with him is safe. R does some smart things to help convince her, such as telling her how to get away from the other zombies without them noticing. He takes her to an abandoned airplane and they hang out there, talking and getting to know each other a little.

While everything involved with the premise of this movie, and really happening in the first half, is good, the second half is kind of the exact opposite. It’s not that anything terrible happens, but just that we stop caring as much or finding this world as interesting or original as it seemed earlier on. Things start to happen in predictable ways. This includes the other zombies (like m), helping the humans out and the melodic character being more accepting than one would expect. I was looking for some real confrontation between he and r, and that never came.

Warm Bodies are interesting. It’s definitely a fresh take on the genre, even more so than Zombieland was about five years earlier. Only unlike that film, this one doesn’t carry out the creative spirit for its entirety. If you go on the theory that this is based on the spare parts of other movies that came before it, then it is no surprise that by the end, the movie has become pretty formulaic. Maybe with some sharper casting, the comedy could have been spiced up, but here, most of it is pretty average. Nicholas hoot is the star, and he’s just okay. The biggest names here are corddry and melodic, and neither one of them is especially impressive in this film. It’s an enjoyable movie, but almost on a B movie level, that is reserved for goofy, brainless fun.