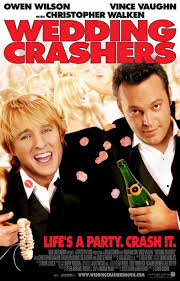 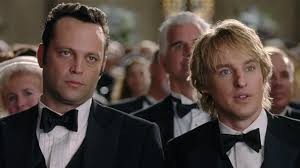 The movie works because it has a fun and creative plot, and because the two best friend main characters are absolutely crazy and funny as hell.

Wedding Crashers is the third movie that showed off Vince Vaughn as a man of immense comic talent. Here’s a guy who put himself right back into the realm of comedy, after making a number of dramatic disasters following Swingers. His official rebirth was Old School in 2003 and then Dodgeball in 2004. Wedding Crashers was 2005, and after those three movies landed, he was officially a mega star again, capable of producing his own movies (the breakup, in 2006).

This was the movie that also helped connect the frat pack members own Wilson and Vince Vaughn, two guys who had appeared together in Starsky and Hutch, but this time got to be partners in crime. The movie was about two regular guys who just loved weddings. They viewed weddings as the perfect opportunity to pick up single girls, horny because of the romance in the air, and seduce them for one-night stands. And while these guys certainly hoped to end the night with one of these girls, as the ultimate goal of the evening, they enjoyed themselves at the weddings as well. These were the guys who took center-stage, helping to cut the cake, getting everybody enthused on the dance floor, and even making speeches to the bride and groom.

The catch is that they weren’t invited. They were crashing the weddings. Which means they had to come up with a whole fake back-story and know the family tree and everything. It’s a little hard to believe that these two could do so much at the weddings when neither the bride nor groom knew them (speeches? and nobody called them out?) but it’s a just go with it kind of movie, where you have to appreciate the humor and not question the realism. Any old movie could have had them hiding in the corner at these weddings, sipping their free drinks, but this movie wants to be out of the box. it wants to go for the gold, no matter how ridiculous, and it is all the more funny because it does.

the first twenty or so minutes of the film introduces all of this. there’s a great opening scene where we get to see these guys at work and watch the way they compliment each other’s style. we also see from the scene just how much they love weddings. they are divorce mediators, and they end up singing the wedding songs during the meeting and talking about things like the band and the cake. by the end of the discussion, they are asking for sky miles from the couple and then we cut away to music. it is a great opening scene and it totally sets the stage for these two guys as idiot clowns.

and then we have all of the quick wedding riffs and montages. we see the way they operate. we watch the tricks they play, such as using eye drops to pretend they’re crying, or recycling the line “we lost so many good men out there,” no matter what the situation. these guys are pros and they are thrilled to be a part of every wedding they go to.

and then they come across the big one. the wedding of a prominent washington d.c. senator’s daughter. these guys live in d.c., and the owen wilson character, john, is a big fan of the senator’s. john is the one who is a little more mature between the two, and the one who starts to feel a little guilty about what they’ve been doing at the start of the movie, as they sit on the steps of the lincoln memorial drinking wine. I like that he points out to vaughn’s character, jeremy, that they’re not really that young. BECAUSE IT’S TRUE AND THE MOVIE ISN’T TRYING TO HIDE THAT OR PRETEND THAT THEY ARE MUCH YOUNGER THAN THEY REALLY ARE. THE ACTORS ARE 35 AND THEY’RE PLAYING 35 YEAR OLDS.

THE TWO OF THEM GO THE CLEARY WEDDING WHERE THEY MEET THE SENATOR (CHRISTOPHER WALKEN) AND HIS TWO DAUGHTERS (RACHEL MCADAMS AND ISLA FISHER). BOTH GUYS FALL FOR ONE OF THE TWO SISTERS AND THE MOVIE TAKES OFF FROM THERE. THE WEDDING IS FUN, WITH JOHN COACHING MCADAMS (CLAIRE) THROUGH MAKING A SPEECH AND JEREMY AND ISLA FISHER SNEAKING OFF TO HAVE SEX ON THE BEACH.

AND AFTER IT’S ALL OVER, THE TWO GET INVITED BACK TO THE HOUSE TO SPEND THE WEEKEND. THIS IS ALL BECAUSE OF FISHER’S BEGGING OF HER FATHER, AND THE MOVIE MAKES THAT ABUNDANTLY CLEAR SO THAT WE CAN BELIEVE THAT THEY MIGHT REALLY GET THE INVITE. AND THEN WE ARE THERE AT THE HOUSE FOR THE WEEKEND, AND FOR SOME OF THE FUNNIEST MOMENTS IN THE MOVIE.

THE WEEKEND AT THE CLEARY’S IS FILLED WITH GAMES AND ACTIVITIES AND WITH JEREMY GETTING TREATED LIKE A PUNCHING BAG. HE SUDDENLY BECOMES THE FALL GUY, AS HE IS CONSTANTLY SACKED HARD IN A FOOTBALL GAME, AND THEN SHOT IN A HUNTING SCENE. ON TOP OF THAT, HE SPENDS EVENING TIED TO A BED, RAPED, AND THEN MOLESTED BY THE SON OF THE FAMILY. ALL OF THIS STUFF IS VERY FUNNY.

THE MOVIE HAS A FINAL ACT THAT GETS AWAY FROM THE LIE AND BECOMES MORE ABOUT RESOLVING ALL OF THE CONFLICTS. IT WORKS. SO DOES VINCE VAUGHN’S PERFORMANCE IN PARTICULAR THROUGHOUT THIS ENTIRE FILM. HE HAS REALLY MASTERED THE FAST TALKING, STRANGE GUY WITH CRAZY IDEAS ROUTINE, AND HERE HE SHOWS IT OFF TO PERFECTION. THE MOVIE IS CLEVER AND FUN, AND I LOVE THE WHOLE WEEKEND MIDDLE SECTION, FILLED WITH WILD GAMES AS THE CHARACTERS HOPE TO GET AWAY FROM IT ALL AND FIND THAT THE WEEKEND IS REALLY ANYTHING BUT RELAXING. ONE OF THEM IS SEDUCED BY THE SON, THE OTHER BY THE MOTHER, AND IT’S ALL JUST CRAZY, RIDICULOUS FUN. THIS IS A VERY CLEVER AND HUMOROUS MOVIE.