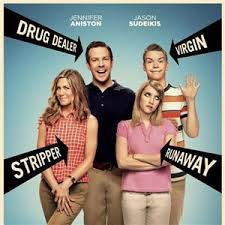 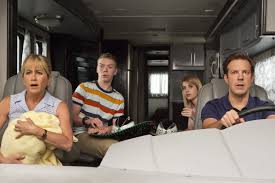 Not very smart or funny, this movie might have a somewhat creative initial plot, but it’s all downhill after that.

This movie starts out with some real potential, being the story of a drug dealer and a venture he takes on. David (Jason Sudekis), enlists the help of some local people who hang around his building, and from there, the movie just starts to quickly fall apart. That’s because of a combination of two things. the first is that there really isn’t much of a plot they are trying to tell here, other then to get the characters from point a to point b. Secondly, Jason Sudekis isn’t much of a leading man, and while he is fine in supporting roles, he can hardly carry a movie on his own. He’s just not funny enough. this movie isn’t very funny and it isn’t very smart either.

We’re The Millers is a lousy movie. It’s one of those comedies that are based around a single idea with nowhere to go after that. The laughs are limited and the storyline runs out of gas real fast. On top of all that, the cast is filled with some very unfunny actors. It’s a bunch of actors who are used to playing supporting parts and this movie shows that there’s a good reason why.

Jason Sudekis is the main one I’m talking about here. He’s never been the star of his own movie before. Now Sudekis has been rising in popularity over the last couple of years, and that led him to leave Saturday night live. That’s fine, as long as he continues to take supporting or costarring roles. He was great in horrible bosses, for example, playing an idiot. But in that movie he had two other costars with equal size parts to his. And in the movie hall pass (which wasn’t very good), it was he and Owen Wilson together. But here, with We’re The Millers, Sudekis is the star and it’s a huge mistake. This guy reminds me of Dane cook, both in his looks and also in his unfunny joke telling.

Jennifer Aniston is okay, but let’s be real here, she’s not exactly super funny. If she was, then she would be headlining her own films instead of always playing the leading lady to other more funny men (Jim Carrey in Bruce almighty, Adam Sandler in just go with it, Owen Wilson in Marley & me.) She’s not the star of this movie though, and she’s certainly not the reason why it doesn’t work. Sudekis is the one to blame as far as actors are concerned.

The story is about a drug dealer, David (Sudekis) who is called up to the big leagues by his boss, brad (Ed Helms), to do a very important job. The job involves going down to Mexico and smuggling a ton of drugs across the border. David is in debt to Brad, and so he really doesn’t have a choice about taking or not taking the job. But before he leaves town, David has an idea.

He notices that when it comes to illegal activity, nobody gives a family a second look. As far as a single guy in a camper on the road goes, he’s an easy target for police and dead to spot. With a family in a camper, however, he is just a regular guy on vacation with his wife and kids. And so he enlists the help of some colorful characters who live in or around his building. There’s rose, the stripper (Aniston), a dorky kid named Kenny who lives down the hall, and then a runaway girl who is out in the streets, Casey (Emma Roberts). David offers to pay them all off after he collects from brad when they get back to town.

And so the movie begins. The plot so far has been pretty good. For one thing, we don’t usually get a drug dealer as our main character. Not in romantic comedies anyway. And on top of that, this road trip premise with a bunch of strangers is kind of interesting. It is certainly different. And yet, somehow due to bad writing, this movie, which started out with some real potential, ends up getting turned into the same old thing. It starts going downhill pretty quickly too.

The first sign that the movie is in trouble might be the way that brad and rose hate each other from the very beginning and are constantly making sly remarks about each other. This is an apparent staple of every bad romantic comedy these days and can be found at the start of just about every one of Adam Sandler’s recent movies. But then things start to get worse.

You see, the movie doesn’t really have anywhere to be until it’s second half, where we meet the drug dealers who David is buying from. With that in mind, the film brings in other characters that are on screen just to waste time. This would be the couple played by nick offerman and Kathryn Hahn. I love nick offerman on TV’s parks and recreation, and he’s good in movies when playing a similar role to his TV character, Ron Swanson (like in 21 Jump Street), but here, he is so out of place that it’s just stupid. The same goes for his wife.

Some example of the mess that this couple brings into the story involve a pot baby, which is the drugs all wrapped up in a blanket, and rose holding the blanket to look like a baby. Now, I can maybe buy the idea that this is being used just to fool the police, because the police will never check a baby, but to believe that the couple they are spending time with never asks to see the baby is just ridiculous. Imagine being around a baby and never seeing its face. Another example of the stupidity of this plot has the new couple that they meet be filled with sexual intimacy problems and look to David and rose for help. When we get a scene of the nick offerman character fingering David’s ear, the stupidity reaches a new low.

There are so many scenes and plotlines in this movie that just feel like time fillers or scenes that have an alterior motive other than making sense with the plot. Take Jennifer Aniston’s strip scene for example. Like a bad guy would really make her do a strip show act to prove that she’s a stripper? Like that would actually prove anything. When the movie needs to fill even more time, it has the Kenny character get bit in the worst possible place by a tarantula, and the Casey character starts dating an idiot.

There are a lot of problems with this movie, but the biggest one seems to be that it is content to go down the same route as every other film. Not many movies start out with potential to be something different. This movie did have that, and it’s as if once they got it they threw in the towel and said their job was done. Instead of continuing with fresh and creative ideas, they took another route, saying that there job was to get this movie to the usual, predictable ending that every other film has. Unfortunately, that’s exactly what we got. If the movie were funnier, I could forgive some of the plot problems, but it really isn’t. If this movie proves one thing it’s that Sudekis isn’t ready to be a leading man. It’s not his fault that the movie is so bad, but funny leading men like Vince Vaughn can at least make a film somewhat enjoyable. Jason Sudekis in this movie isn’t able to pull that off.