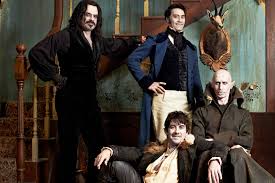 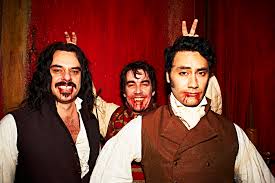 Basically a mocumentary crossed with a vampire movie, this one is very funny with all of it’s ideas, however it has  a very limited plot, and that hurts it in the second half.

It’s a funny movie that feels like a mocumentary about a group of vampires. This group is of four members who are flatmates in New Zealand. They hang out at bars and parties and try to get virgins to come home with them, so that they can bite them and drink their blood. The funny elements are the way this movie spoofs the genre, taking all of the rules that we have come to know over time, and then making jokes about them. For example, silver is supposed to hurt vampires, and so when a woman gives a vampire a silver necklace as a present, there is a joke. The same goes for when one vampire texts another one that there is a cross behind him. Only what all of this amounts to is nothing more than a bunch of jokes held together with an extremely limited story. In the first half of the film, when we are admiring the humor and originality, the lack of story does not matter as much, but by the second half, it is definitely felt.

What We Do In The Shadows is a New Zealand movie about vampires. It’s a comedy that really spoofs the genre, almost like a mocumentary. That means it examines all of the usual cliches and gives us a funny take on each one of them. The only difference between this and the usual mocumentaries of someone like Christopher Guest is that this film doesn’t really feature interviews. But it does include plenty of quick jokes and an examination of what things could possibly be like if any of this were actually real.

What the movie lacks in is plot. The Christopher Guest movies tend to handle the plot better than most films in that genre, by centering it’s storyline in a certain environment and then focussing hard on the characters. If this movie tried something like that, it might have led to more a central story. Instead, it isn’t so much about the characters, but about the world. Whereas the Guest movies just use the environment as a stepping stone to get started, this movie uses it as it and the examination of this world, as it’s sole mission, throughout the entire duration of the film.

Now, a lot of that works. In fact, many of the jokes are dead on the money. At the start of the film, for example, we see one character, Viago, taking us on a sort of tour of the apartment as he goes to wake up the other members of the flat. He is calling a flat meeting to discuss some things with the group, and his opening doors, coffins, or closets to reveal each of the other characters serves as an introduction to them. He even narrates to us a little bit about each character before he approaches them. If more of the movie were done in this interview with the camera method, this would have definitely been more like a mocumentary.

There are four vampires in all living in the house, although one of them is too old to attend the meeting. The other three sit at a table to discuss how one of them is a slob and is not pulling his own weight. The joke here is that this is the same thing that ordinary apartment members might be meeting about. Only here they are vampires and so every example gets a little bit extra of a punchline. The dishes, for example, haven’t been cleaned in hundreds of years, and we get a look at the kitchen sink where they are all piled up. When the characters get on each other’s nerves, they fly up into the air at each other.

The other members of the flat are Vladislav (played by Jermaine Clemement from the HBO show Flight of the Conchords), and Deacon. Viago tells us a little more about his history when he takes out a silver necklace. He tells us a story about how there was a woman who he loved and mailed himself to in a box. Only the box was sent to the wrong address and he ended up spending years in the box, being shipped around. When he finally reached the girl, she had already chosen another. But she gave him a silver necklace with locket pictures to remember her by. The only problem is that vampires can’t wear silver. So every once in a while Viago tries to put the necklace on until his skin burns so much that he can’t take it anymore. He demonstrates this for us.

All of this is very funny. That’s in large part because Viago is talking directly to the camera, giving us a sense of why things are the way they are. He takes us through the rules. But once he stops talking to the camera as much, the movie heads downhill. It might also have been helpful if some of the other characters spoke to the camera a little bit as well. When we see the guys decide to go out on the town for a night, they get all excited and dressed up. It turns out, however, that they can’t really get in where they want. The rule for vampires is that you have to be invited in, and no bouncer at a bar is going to ask them to come in.

They end up at a vampire bar and meet up with a girl who serves them. It is her job to find them virgins to bring home for them to feast on. The characters explain that they like virgins simply because it sounds cooler. The woman explains that she doesn’t want to bring friends of hers over, because she knows she will never see them again. For that reason, she calls up enemies or people who have given her a hard time over the years, and tries to invite them. There’s a great moment where the vampires have two people that the woman has invited over, sitting down at their dining room table, and are questioning whether or not these people are actually virgins.

All of this happens in the first portions of the film, as setup. The real story begins here, in this scene with the people who have been invited over. The vampires turn one of them into a vampire to join their pack, and the story now becomes about this character. This is where the movie starts to lose its focus. On the one hand, we needed a story, and it was only a matter of time before the explaining of the rules ran out of fuel. But on the other hand, this story is very weak and not nearly as funny as everything that came before it.
The new vampire is a man named Nick, and he refuses to follow the vampire rules. That means he tells people he’s a vampire, invites a friend over who is not a vampire, just to hang out, and even invites a human to a vampire party. All of this seems like a collection of moderately humorous scenes instead of an actual story that moves forward. The whole premise can be summed up as what happens when a group of vampire convert another person to join them. There is no ongoing story or buildup that really takes place after that.

While the movie, What We Do In The Shadows, includes all kinds of funny ideas, what it doesn’t include is much of  a story. It tries to pass that off, by continuing to bring in humorous moments, such as when the vampires run into a pack of werewolves, twice. Only at a certain point it becomes painfully obvious that this is more like a collection of little skits than an actual film. Most of the jokes do work, and for that reason, it’s a pretty cool film, but it does also leave you feeling a little empty. Especially in the second half. This is a movie that definitely runs out of fuel. The first half was intriguing because of all of the ideas coming at us like an explosion of humor, but then there just wasn’t enough new material or story left for the second half.