While You Were Sleeping ** 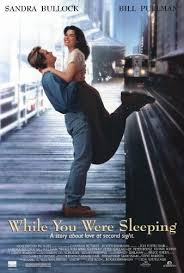 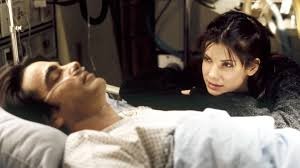 While You Were Sleeping might be entertaining on a first time viewing, but it is Also pretty ridiculous. The movie is about a woman who pretends to be engaged to a guy who is in a coma. We’ve all seen movies where there is a major lie going on throughout the film, and this is really just another version of that kind of movie. Only because it’s got Sandra Bullock and not a guy as the lead, it’s sweet and romantic.

Most of the time, in the case of these movies, the guy is pretending to work somewhere he doesn’t or to know somebody that he doesn’t. Like pretending to be a friend of someone. There’s always a lie, and the movie always has the main character jumping through obstacles trying to keep that lie going. This movie follows all of these checklist formulaic moments. There are always moments where the main character is almost caught, and by the end of the movie, the secret always comes out.

Sometimes these movies are done well, sometimes they aren’t. A key component is that the movie has to be funny even without the premise. There have to be jokes that would really work in any movie, and they just happen to be in this one. Wedding Crashers is a perfect example of such a movie. Yes, the characters are holding onto a lie about who they are, but there is so much more going on, that the lie is just the starting off point.

In While You Were Sleeping, the lie is everything. Sandra Bullock’s character, Lucy (such a loveable name), is a misfit. She works at a subway booth, doesn’t date, and never travels. It appears that Lucy doesn’t even have any friends, which is the first sign that this movie doesn’t know what it’s doing. In these sorts of movies, the main character always has a best friend. Really in any romantic comedy. Where would Julia Roberts be if she didn’t have Kit to tell her stories about Richard gore to in Pretty Woman?

But instead of a friend, Lucy has a boss, Jerry, and a much older black man. Maybe the writer thought that would make Lucy even more pathetic, that she doesn’t have any friends. He was right. For our main character, we have a woman with no friends and no family, who works her boring job because she’s got nothing better to do. And we’re supposed to like this person, just because she is a loser.

The movie begins with Bullock’s voice-over telling us all about her boring life and how every day she looks forward to the moment in the morning when peter Gallagher comes up to her booth and asks for a ticket. And yet she never talks to him or tries to make even the slightest bit of conversation. For a woman who is so tongue-tied, she sure has no problem lying to everyone and coming up with spur of the moment stories and justifications throughout the movie.

Gallagher’s character, Peter, gets robbed and pushed onto the tracks and Lucy saves him, but leaves him in a coma. And now here where the real plot begins…a nurse overhears Lucy say to herself, “I was going to marry him.” then the nurse goes and tells the whole family that Lucy is peter’s fiancé. There are way too many problems here. First, that Lucy would say that. Second, that the nurse would overhear it. Third, that the nurse would take that to mean Lucy was peter’s fiancé without talking to Lucy about it. And finally, and this one is the worst of all… that the nurse would announce the relationship to the whole family. Even if she was right, maybe Lucy and peter were keeping it a secret. The whole thing is so stupid and depends on way too many coincidences.

Now, what I do like about the movie is that Lucy ends up falling for someone else. If it was just her, Peter, the lie, and the lie coming out and Lucy having to explain herself, then it would be like any other movie. The one thing this movie has going for it is that there is another guy who Lucy ends up liking. As soon as Lucy is announced as the fiancé, (and why in the world does she go along with it?), she starts to get to know the family and then the brother, Jack (Bill Pullman.)

I like how Jack is brought in, in such a way that first we meet all the other members of the family and only hear about Jack (Pullman), giving him a sort of introduction. And then we meet him, and he’s the one that suspects Lucy the most. Either that or he’s just giving her a hard time. We get the banter between them, that goes all the way back to movies like His Girl Friday with Carey Grant. That becomes a lot of fun. And we watch as the relationship between them develops.

But even when this movie starts to feel like it might be getting good, there are still stupid moments of coincidence and misunderstanding. Jack goes to see Lucy and sees her hugging another man (Joe Jr., a cartoon-like version of an Italian guy.) or the little girl sister hears one of Lucy’s coworkers make a comment about Lucy being pregnant and then goes and tells everyone in the family, including Jack. How many misunderstandings are there going to be? This movie is built on a very thin plot, and while it does hold our attention and is sometimes cute, it’s ultimately pretty stupid.