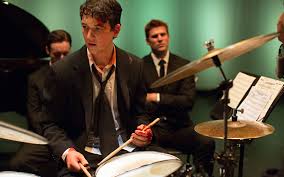 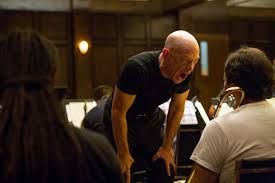 A riveting and intense movie about the dynamic between two characters, a boy in a band and his merciless instructor.

A truly brilliant film, this movie is basically a power game between a teacher and a student. Andrew is chosen by teacher Fletcher to join his small band unit, and gladly accepts, knowing that Fletcher is the best. To get chosen by him means you have made it. Only andrew quickly learns that Fletcher is not such a great guy. He ridicules and terrifies his students, and Andrew watches himself completely fall apart under this man’s guidance. the scenes between them are all fantastic. So is the way that this movie ends up in such unpredictable places. Both J.K Simmons and Miles Teller give knockout performances, and the movie keeps you constantly on the edge of your seat.

Whiplash is a dynamite film. It’s a movie built on lively personas and a story that we haven’t really seen before. especially not in the unpredictable ways it moves during the second half. this is the story of a kid striving to be the best at something, which sounds like a very generic concept, and yet this movie makes it feel completely fresh. that’s because, here, he’s got a villain for a teacher, who pushes him to the point of breaking. Both characters are written and performend so well, that the tension constantly builds and keeps you riveted throughout the film.

The movie opens with andrew, (miles teller), playing the drums in a small, dark room at the end of a hallway. both the hallway and room are abandoned and otherwise quiet, and we know this because the opening shot is of andrew in the room, as seen from the far end of the hall. we move down the hallway, tracking all the way until we get to his room, watching him play the drums. it’s only once we enter the room that the camera turns to reveal another character standing there. this is fletcher (J.K. Simmons, in the role and performance of his career), and apparently our move down the hallway was taking on his point of view. the tracking shot and reveal is a very cool way to begin the film.

Now we get a fantastic dialogue scene between andrew and flethcer, which is filled with wit. fletcher asks andrew if he knows who he is. when andrew says yes, fletcher asks him why he stopped playing. when andrew starts again, fletcher responds that andrew’s answer to the question was to just start playing again, and not to actually provide an answer. the whole thing is very much a powergame, and it moves at a pretty rapid speed. characters aren’t waiting to hear what the other has to say or do, but instead are just cutting the other off.

After this scene, we start to get into andrew’s life a little. we meet his dad (played by paul resiser), who he goes to movies with. there’s a situation with popcorn and raisins that andrew likes to eat around, which is clearly a metaphor for moving around obstacles like they were landmines. we also meet a girl who andrew has a crush on and asks out on a date. their banter is also witty, with the girl playing andrew with her conversation, much like fletcher did to him in the opening scene.

From here we go to band practice, watching andrew surrounded by other members of the unit, on what starts out for him as a typical day. that changes pretty quickly when fletcher walks into the room and watches him play. flethcer decides to give andrew a chance and tells him to be at his stuido the next day at 6 a.m. when andrew oversleeps and rushes to get there, making it only a few minutes late, he is surprised to find a number of things. first, there is no band practice at this time. fletcher told him the wrong time for the practice. okay, maybe this doesn’t mean anything and fletcher just wanted to meet andrew early. only, second, fletcher is not there either. now, was fletcher there on time, and did he leave when andrew didn’t show up, or was the whole thing fletcher messing with him as a sort of power trip? the movie never answers this question and is all the better because of it.

when the first practice does begin, fletcher tells andrew not to worry and that it’s normal to be a little nervous on his first day. he speaks to andrew privately in the hall, and asks him a couple of questions about his parents, and whether they were musicians or not. then the practice begins and it’s all hell breaking loose. fletcher doesn’t stop screaming at andrew and he uses the information that andrew just confided in him, about his parents, against him. we learn pretty quickly that the whole nice, friendly conversation we had just witnessed, was really part of a game, and the goal was for fletcher to get ammunition he could use. the scene ends with andrew crying while playing the drums and fletcher not letting up with his relentlessness.

things continue to go in this direction for a while. there’s a scene where fletcher tells his students that one of them is out of tune and asks the guilty party to identify himself. when nobody does, he then asks one section to play their instruments at a time, so that he can figure out who the person is. after he narrows it down to the section, it’s one person at a time playing. the scene is so tension filled, that it feels like he’s holding a gun on them, deciding who to shoot. and then there’s a punchline at the end of the scene too, about who the student really was and why fletcher used this moment as an opportunity for something else.

things get so heated with the drums situation that andrew has to tell the girl from the movie theater that he can’t see her anymore. it’s one more way that this is not your typical movie. there’s no happy romance working it’s way as a sub-plot here. this is strict, harsh reality, every step of the way. fletcher’s next big scene of breaking andrew apart comes when he sends the entire class away because the drummers just aren’t cutting it. he then uses the time to simultaneously ridicule and audition his three drummers, one after another, until they get the speed he wants exactly right. fletcher runs through them, giving each one about a second to play, before he cuts them off. it’s another one of those fantastically tense scenes.

a big moment comes when the band has a major performance and andrew leaves his drum sticks behind. fletcher won’t let him play if he’s not prepared, and so andrew gets into his rental car and floors it all the way to where he left the drum sticks. he then floors it back and gets into a giant crash. the moment he is hit is explosive and shot in such an exciting way that we practically feel the accident. that’s because we are right there, in the front seat with andrew, when it happens. only the moment doesn’t end with the crash. it keeps going with andrew busting out of the car and running like a superhero to the performance.

keeping with the realism, andrew makes it to the stage bloody and ready to play, only his performance doesn’t exactly go great. how could it after what he just experienced? and the movie doesn’t pull any punches with that, keeping the consequences pretty real. there’s a whole other act that comes after all of this involving andrew leaving the school, turning on fletcher, and then a total surprise in where both of them end up. the final scenes are out of control with how far they go, and how unexpected it all is. that’s what you want in a good movie. something that amazes you with how unpredictable it is and how brilliant the twists and turns are. whiplash is that kind of a movie.