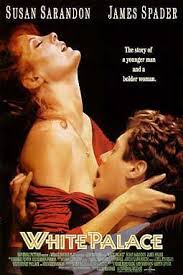 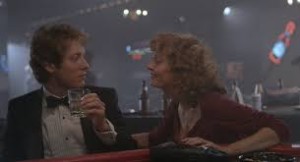 A pretty generic romance movie about two people from opposite sides of the tracks who have to get past challenges to make things work.

White Palace is a movie that really didn’t need to be made. That’s because there is nothing new in it whatsoever. A steamy one-night stand? Bull. It’s not even that steamy, and it ends up going on for a lot more than one night. A story about a woman who is much older than the man? So what. We’ve seen that before. And two lovers from opposite sides of the tracks, that storyline goes back as far as romances do. This movie is just the same old thing we’ve seen time and time again.

A clue that this movie didn’t need to be made might have been the title. In the movie, Max meets Nora one night at the white castle fast food restaurant where she works. Only it’s not called White Castle. The movie couldn’t get the rights to use that name, even though Harold and Kumar sure didn’t have a problem securing those rights for it’s movie about weed.

So this movie changes the name of the place from white castle to White Palace. And then, since it can’t come up with anything better, it actually names the movie after that embarrassing attempt to copy the fast food franchise’s name. Whereas any other movie would have either made up a completely original name for the restaurant, or else if it did copy a name, would have tried to hide it, this movie puts it right out there for it’s title. How dumb can you get?

Enough about the title. The movie itself has very little going on. These actors are definitely talented, and Susan Sarandon in particular is pretty on her game here. But then again, she’s always good. And James Spader does a fine job playing a regular guy who ends up taking a risk, going home with this chick, and then realizing that he actually likes her.

Spader is a strange actor in my opinion. He seems very dark and disturbed, and he also seems to constantly choose movies where he gets to have sex with beautiful girls. From Two Days In The Valley to Secretary to Crash, this guy is clearly in touch with his sexuality. But that doesn’t mean he’s much of an actor. Only in recent years, with him going to television and taking on roles in Boston Legal and then The Office, did his true talent start to come out. Turns out he’s actually pretty funny, although it took him long enough to finally try comedy.

The Spader we know from the movies is more like his role from Less Than Zero (crazy drug dealer) crossed with his role in Sex, Lies, and Videotape (disturbed creepo). And here, in White Palace, playing the normal guy, he’s still a little weird. It’s just not a role that seems to fit him. While I advocate the guy trying something new, I’m not really sure this is it. After all, this is another movie where he gets to have sex with a beautiful woman. And it is a drama. Only this time he’s not playing the creep.

A big part of the problem with this movie is that for most of the film, nothing happens. Max meets Nora when he leaves his friend’s bachelor party. They have an argument and then they meet again at a bar. They sleep together and it seems like they will never see each other again, but then he shows up to fix her mailbox that he ran over when he was drunk the night before. From that point on, it is a straightforward relationship. The only issues come when Max doesn’t seem to be inviting Nora to go out with him and his friends. And he doesn’t tell her about the invites either.

The big issue of this movie is whether max can bring Nora into his world. He is from the upper class and she is somewhat poor. When he gets her a dust-buster as a present because her apartment is dirty, she freaks out. And when he doesn’t tell her about a wedding he’s going to and then shows up at her place afterwards with flowers, she’s not having any of it. Nora knows max is lying to her, and she even thinks that maybe he’s seeing somebody else.

But this movie isn’t interesting enough to have anything like that happening. Instead, it’s as simple as that he’s afraid of what his friends will think of her. And for good reason too, as can be seen in the climax, when he finally does bring her over to one of their houses. Only it’s not the friends who are the problem. Unfortunately, that scene happens to be the only really exciting one in the movie.

White Palace is not a good movie, mainly because it rehashes the same kind of storyline that we have seen before, again and again. The title being so lousy is not really a big deal, except that it is kind of symbolic for how little effort this movie attempts to make at being something creative. The story is very simple and also often kind of uninteresting. For example, there’s a sort of secret about what happened to Nora’s son that is handled all wrong, so that by the time it finally comes out, we don’t really care anymore. Characters like her sister pop in out of nowhere to try to give the movie some new energy, but end up just dragging the thing on. There are definitely good moments, mainly that dinner party scene at the climax, but for the most part, this is just a routine film.