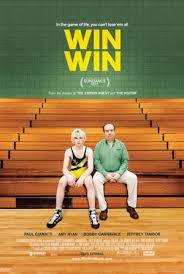 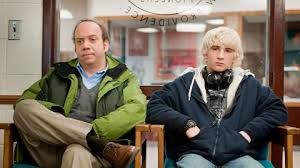 A smart and witty black comedy about a struggling family man who finds himself in an unusual situation with a stranger.

Here is a movie where everyone is hitting it out of the park. Everyone. Just nailing it. The cast couldn’t be more perfect or more dead on. Paul Giamatti, Bobby Canavale, Amy Ryan, even Jeffrey Tambor. And the kid who plays Kyle, a boy who shows up on his grandfather’s doorstep, not aware of the lie that has taken place before he got there and what it will mean. Kyle joins the wrestling team under the coaching of Mike (Giamatti,) and he’s great, but his number one priority is helping his grandfather out. And that’s where things get tricky. Mike has promised the grandfather and the courts something and then gone back on what he agreed to, and the truth is catching up with him. There are plenty of movies about characters who keep secrets and then the ways these secrets come out, but Win Win feels different than anything we’ve seen before. For one thing, the writing and humor are both off the charts. For another, this story finds all kinds of interesting ways to get creative. It’s a truly excellent film.

Paul Giamatti is the number one go to indie actor right now. And it’s because of movies like Win Win. he had a big career appearing as side players in movies like private parts and my best friend’s wedding. but it was sideways that was his break out role as a star. and since then his career has gotten bigger. for a while, Giamatti tried to cash in on being an a list star, headlining movies like lady in the water, that turned out to be awful. but recently he has settled back into his roots, still being the star, but only of smart indie movies, instead of big budget garbage. no more playing the bad guy to Clive Owen in the action movie Shoot ‘Em Up. in the past year, Giamatti has starred in both Win Win and also Barney’s Version, and both are terrific films.

Win Win is about a family man, mike (Giamatti) who works as a lawyer and also a high school wrestling coach. when he was young, he was on the wrestling team, and this is his way of maintaining that youth. he coaches alongside his law partner, Jeffrey Tambor. Mike also has a best friend, Larry, who is the funny, immature, supporting character.

Larry is one of those id characters who ends up stealing the show. he’s the crazy best friend, the guy who gets all the laughs, but who in real life we might find more annoying than funny. in a two hour movie, Popping up only every once in a while, however, he’s a lot of fun. he sits in his car outside his old house, watching his ex-wife and her new lover and all he can talk about is whether the guy wears his tool belt inside the house or not.

For Mike, things are going nowhere fast. he has a lack of clients and major money issues to go with it. they have a boiler inside the building of his law office that makes loud banging noises all throughout the day, only Mike has no money to get it fixed. so instead, he tells his secretary that she’s hearing things because of her hangover.

In the first part of the film, Mike deals with one of his clients who is Potentially being kicked out of his house. the client is an older man named Leo, (Played by Rocky’s Burt Young), and the government is claiming that he can’t take care of himself anymore. all Leo wants to do is to stay in his own house, and he even has a hired woman who comes to help him. but the government says it’s not enough.

when Mike gets a look at how much this woman is being paid to be his guardian and realizes that Leo is pretty well off, he suddenly knows his next play. he goes to court in front of a judge and proposes that he will take over as Leo’s guardian. he claims that he will make it so that Leo can stay in his own home. but no sooner does the judge sign the papers, than Mike whisks the old man off to an old age home without ever batting an eye.

Not too long after this, Mike finds a high school kid sitting on the stoop of Leo’s house. it turns out that the boy is Leo’s grandson, Kyle, come to stay with his grandfather. Mike is uncertain of what to do about this and consults his wife, Jackie, played by the great Amy Ryan. together they decide to let the boy stay with them. and Mike starts brining him along to work, allowing him to sit and watch during the wrestling practices.

one day Kyle asks to join in on one of the practice sessions, and as it turns out, he’s pretty good. Mike and his friends Google the kid to find out that he was a great high school wrestler back where he was from and even made it to the states. Mike’s team has always been terrible, and now he sees his chance to finally give them the lift they need. he enrolls Kyle in school there and gets him a spot on the team.

all of this is a lot of fun, but it’s hardly groundbreaking. that’s when the story takes an unexpected and revitalizing turn somewhere in it’s second half. the boy’s mother shows up wanting him back. she also wants to be the guardian of Leo. her interest is in the money that the guardian receives, only she has a record of drug abuse and the boy does not want to go with her. secrets end up coming out, and the intensity just builds and builds.

This is a wonderful movie because it has a flawed main character who we sympathize with and relate to. it also has an unusual story about a new kid in town and the way our hero tries to exploit both him and his grandfather, before coming to terms about what he’s doing. the conflict with Kyle’s mom and her lawyer becomes a major plot Point that elevates the film to a whole new level. and back home, we have Amy Ryan, one of the best actresses working today, in total disbelief about the things her husband has been up to, it’s a fantastic movie with a really interesting and Powerful story. Nearly everything about this movie works. Giamatti, Amy Ryan, and even the supporting immature friend are all on top of their games. The movie is well written and the plot is captivating. the ending might feel a little too neat or anti-climactic, but that’s only because it is trying to keep things realistic. the movie delivers not only in black comedy hilarity, but also in fantastic acting and plot turns.