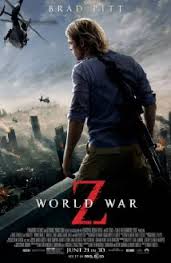 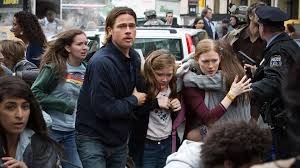 A cross between outbreak and 28 days later that gets better as it goes on, and turns into a pretty fun movie.

This movie is far better than one might expect, considering how many zombie movies and shows there are, and also the problems it sounds like this movie might have had in getting made. None of that matters. The film is smarter than the usual zombie flick and finds interesting ways to present the material as if it were new. Unlike other films in the genre that go for the action scenes and horror effects, this one goes at it as more of an outbreak movie. That means it treats the zombie battle as a virus movie, like Contagion, and has brad pitt’s character, Gerry, on a search for a cure. He travels the world, goes to three different countries, and gets involved in some pretty cool situations. the movie gets better and better as it goes on, and the second half is for more lively and creative than the first. This is by no means a fantastic film, but it’s got enough thrills and interesting ways of presenting it’s ideas, to be a pretty decent film.

World War Z is better than I ever expected it to be. Going in, you know that this is a zombie movie, and you know that there’s very little new that they can do with the horrors and excitement of zombies after TV shows like the walking dead, and countless movies, have already come before it. You also know that this movie in particular, is not about gore, and goes relatively soft on the graphic nature of the situation. And then you know that the movie really only stars one name actor, Brad Pitt, and that the director, Marc Foster, has had plenty of big screen misfires, and is hardly the best filmmaker to be making this kind of movie. You might have even heard about all the delays and reshoots on set, and how at one point things got so bad that pit and foster weren’t even speaking to each other.

How can a good movie be made from all that? It almost seems impossible, and yet somehow it works. Somehow the pieces comes together, and this movie ends up being much better than it ever had business being. This movie proves the theory that sometimes all signs that point to something still don’t add up. I mean, out in theaters right now you have a movie (Pacific Rim), by Guillermo Del Toro, that should have perfect, right up that director’s alley, and it turns out to be a mess. And then you have this movie, World War Z, where all signs point to it being lousy, and it turns out to be pretty good. So what gives?

I think a large part of the credit for this movie turning out the way it did has to be given to bred pit. Clearly this is a guy who has gotten smart about picking his projects and probably even contributes ideas to them (why else would he be warring with the director about the way the movie was going?) look at what pit did for money ball, just a few years ago, a movie that could have easily been generic and routine and yet turned out to be pretty great. Between him, George Clooney, and matt Damon (the ocean’s eleven trio of big a list stars), there are some smart actors making some smart movies right now.

World war z starts off with getting into the action pretty quickly. There is one opening scene of Pitt’s character, Gerry, in the kitchen of his home with his family, joking around with them and making pancakes. After that introduction scene, it’s the four of them (he, his wife, and two daughters), on the road, headed somewhere. And that’s when the attack starts. It all happens a little too quickly with a policeman driving by on his bike first, knocking off Gerry’s side-view car mirror, and then Gerry getting out of his car, being told to stay in his car by another policeman, and than watching that second policeman get run over. Suddenly the zombies are attacking, and we’re into the action.

Gerry and his wife and kids start making moves. They go to a grocery store, which is being rioted by people who are stocking up on supplies so that they can lock themselves in their homes for a while. Lots of things happen in that store, all of them quickly. Sometimes it’s too quick to even follow. For example, Gerry has an altercation with a man in the pharmacy section, and the man has a gun. This man might or might not be a pharmacist who works there. When he gets back to his wife, she is being attacked by someone, and on the ground. Is this attacker a zombie or a human? Is he trying to rape her or what? Gerry shoots this guy and then raises his arms as a cop runs in. only the cop doesn’t care about Gerry and is just there to get supplies like the rest of them are.

Gerry ends up getting in contact with some high-up ranking officials at his old job, working for the u.n. These guys want Gerry to work with them and help them find out what’s been going on. They need his help in finding a cure and getting some questions answered, and so they bring him and his family in. they are all brought to safety on a huge ship in the ocean, where it is explained to Gerry very clearly, that if he doesn’t leave his family and go out to help the u.n. then his family and him will be asked to leave the ship. Everyone on the ship is serving a purpose and if they’re not helping in some way, then they need to leave and make room for someone who will help.

And so Gerry goes off to other countries to start looking for answers. He goes to Korea first, where he travels with a scientist who is humanities best hope. A few questions get answered there, but really it’s just a series of clues or “bread crumbs,’ as the scientist puts it. By the end of the sequence here, where Gerry is riding bikes with some others in the rain, because they are faster than running, Gerry is headed to Israel to see what the people there know.

He gets to Jerusalem, where the people have built a huge wall, and yet somehow haven’t figured out yet that noise attracts the zombies. At this point the movie is about half over and so far it has just been okay. There hasn’t been a whole lot of action, and the plot points have been mostly routine. I do like the way these zombies move, running and jumping on four limbs, like a dog or lion, instead of on two feet, like a person. The sequence of them climbing up the wall in Jerusalem, by piling on top of each other is cool, but we’ve already seen this in the trailer.

Gerry makers it onto a plane to get out of Jerusalem, and this is the turning point of where the movie starts to get good. There’s a fantastic plane attack by a zombie (also featured in the trailer), and then a crash landing that doesn’t leave Gerry in the best shape. He and a female soldier, whose hand he had to cut off after it was bit, now find their way through the desolate wasteland of an abandoned community, to a center of disease control building. And it is in that building that we get our climactic discoveries, zombie fights, and action scenes.

World War Z is not what one would expect from that title. This is not a movie about a war, in the trenches against zombies. Instead, it is much closer to 28 Days Later, or Contagion, and about a virus as much as it is about these monsters. The movie is divided into clear segments and each of them represents a different country or location that Gerry is in. first it’s his home in Philadelphia, and then for the next three sections of the movie, it’s three different countries that he finds himself in. the effects in this movie are pretty impressive. Unlike something like I Am Legend, where the creatures looked ridiculously fake, hear they go for semi-realism, don’t shy away from close-ups, and find ways to make this material work. The overhead shots from far up above cities, during the zombie attacks, are also pretty great. The story is just average, but this movie still has enough going on to maintain the suspense and deliver on its thrills.