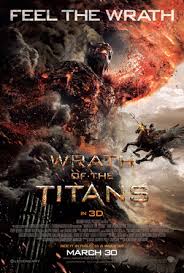 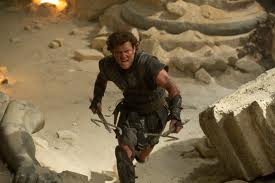 Slightly better than expected, but not quite as good ad the first movie, this sequel delivers on pretty much what we’d expect… the action and a sometimes fun sword and sandals story.

Made in the exact same spirits as the first movie, Clash of the Titans, this one suffers the usual curse of sequels, which is that the ideas just don’t feel as fresh, original, or creative. The story about Hades still being resentful that his brother Zeus put him in charge of the underworld, has Hades now team up with Ares (the god of war) to release their prisoner father, Cronos, and keep Zeus as their prisoner. None of it is really all that smart, but what we do get is a large amount of beasts coming out of the underworld and fighting the humans (just like the first movie gave us.) Perseus is again the star, and as played by Sam Worthington, he’s a grunt of an actor who doesn’t seem to have an intelligent bone in his body. Good thing he doesn’t need one for this movie. The film is fun with all of its glitz and glory, but you can’t help but thinking while you’re watching it, that it’s all kind of dumb. So what? As a guilt pleasure B movie, loaded with special effects, it’s still enjoyable.

Wrath of the titans isn’t anything great. Nobody, I’m sure, expects it to be. Not after the first movie, Clash of the Titans, turned out to be little more than a fun action movie with a decent story. Not after this sequel was put into the hands of a pretty lousy director (the guy who made Battle: Los Angeles.) At least the first movie had Louis Letterier who made the half-decent Edward Norton Incredible Hulk movie. And that Letterier directed Clash movie was about as good as you could hope for, with this kind of thing. What that means is that the action was fun and stylized, and the story was okay, but the characters and dialogue were pretty weak. So how good could this follow up film possibly be? Well, surprisingly it’s not all that bad. Not as bad as it could have been, anyway.

That must be in part due to the low expectations. You go into this movie knowing it’s going to be B movie campy fun at best. It’s big budget monsters against warriors in sandals. It’s 300 meets mythology instead of history. It’s Troy meets monsters. If you go in thinking that way, there are two things that immediately become apparent. The dialogue is pretty stupid, but the plot isn’t half bad. Sure, it feels stretched out to accommodate the monsters and action agenda, but that’s pretty much what you would expect.

In the first movie, Hades (played by Ralph Fiennes), showed resentment toward Zeus for making him in charge of the underworld while Zeus got to rule the heavens and Poseidon got to rule the sea. In this movie, Hades puts a plan into action to exact revenge. (Even though that’s exactly what he did in the first movie too.) The only difference is that his plan didn’t fully come out in the first movie until the later parts of the film, (to Zeus, anyway. The rest of us got to see what Hades was really up to from pretty early on. ) Here, the plan of Hades is established from much earlier on, and it also is done in a way that actually draws a little bit from real Greek mythology.

As the legends go, the Greek gods Zeus, Poseidon, and Hades buried their father, Cronos, under a mountain. They took his power and divided up his kingdom into three realms and that’s how they came to rule the world. Well, now Hades decides his jealousy of the two realms of his brothers must be appeased and so he, along with Zeus’ son Ares (the god of war), decide to set Cronos free and use him to defeat Zeus and Poseidon. They also kidnap  Zeus and kill Poseidon. Zeus is held in a prison at Tartarus, where the only way to get to the prison is to go through a labyrinth. Wouldn’t you know it; there’s a Minotaur in the labyrinth as well (way to cash in on the Theseus myth). He is just one of many beasts that appears in this movie.

The storyline also has it that because of the destruction of the mountain that held Cronos; all of these other monsters come free as well and attack. It starts with the chimera, a two headed giant dog / monster with a snake for a tail. Perseus fights this creature off, yells some terrible dialogue at it, but has a good old told time putting it down. The sequence is pretty representative of the entire movie, which is to say it’s dopey, but also kind of fun. This hybrid of a creature even breathes fire, just for extra measure.

After that it’s onto the Cyclops Island, which is a secret island that only Poseidon and his son know of. The Cyclops being sons of Poseidon, and living on a private island is something out of the Odyssey, the classic Homer poem, (also known as Ulysees.) And it’s put to good use here, having the Cyclops’ start out as enemies, but then turn into allies as they accompany our heroes for a little while, on their quest. This is reminiscent of the scorpions in the first movie, creatures that attacked the main characters until our heroes found a way to control them and ride on them over distant lands.

Similarly, the first movie was all about finding a weapon that could put the kraken down. That weapon turned out to be Medusa’s head. This movie, also, is about finding a weapon and calls upon the real blacksmith from Greek mythology, Hephaestus, to provide it. The weapon is a combination between Zeus’ lightning bolts, Poseidon’s trident, and whatever Hades uses. Hephaustus is the one who originally made these weapons for the gods and so it is he that has the ability to put them together. Unfortunately, it also feels kind of forced, in a little too much of a basic way. Let’s put it like this, the Lego Ninjago used the exact same idea, about a decade later (putting all of the elements together to form one giant weapon,) and in that movie for little kids, it felt just right. Here, in a movie about Greek mythology and action, that is clearly for adults, we hope for a little more.

Not too long after our band of heroes find Hephaestus, they are led into the labyrinth with its cool secret doors and passageways. This is the third movie in about a year to feature the Minotaur inside a labyrinth plot line (Your Highness, The Immortals.) I’m glad they keep trying to get it right, but I’m still waiting for the movie that actually does. Wrath of the Titans comes the closest, making the walls of the labyrinth movable and giving a real sense of being inside somewhere claustrophobic and treacherous once the characters have entered.

Wrath Of The Titans might not be as good as the first movie, but it’s still kind of fun. Mostly because it pays attention to Greek mythology and comes up with a story that combines the legends into something that kind of makes sense. The first movie did the same thing and both times it works, although here ideas do feel a little more forced, as if they’re pulling at scraps. But the movie does a good job with what it’s left with, including making some clever jokes and references about events in the first film. The kraken, for example, is not only mentioned, but also spoofed. Characters do impressions of Zeus, saying “release the kraken,” and laugh about it. The first movie was about bringing in as many beasts as possible, and throwing them at our heroes. This sequel goes for slightly more of a mystery. Every challenge the characters encounter leads to more clues and answers that bring them closer to defeating Cronos. The action isn’t quite as good as the original, and that is largely due to the less talented director here. But for the most part, this movie works, at least in the ways that you would expect.