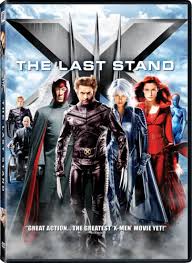 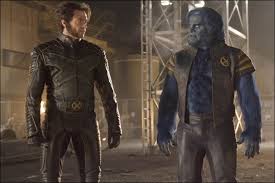 A movie that bites off a little more than it can chew, this one wants to about a mutant cure, and about the war to end it all between mutants, and about the dark phoenix storyline… only part of it works.

This movie is loaded up with over the top, fake looking special effects, and terrible dialogue, yet there are still plenty of things in the movie that work. For one, the plot may not be anything great, but it certainly tries, diving into moral issues when a cure for mutants is invented and then weaponized. It’s also cool to learn more about the story of these characters and where they end up. The movie kills off lots of main characters and definitely goes for being huge in scale and like a real end to the trilogy. While it does have it’s problems, as a throw away B movie take on the series, a lot of it ends up being kind of cool.

X Men III isn’t the same kind of movie as the others. It’s a movie that takes for granted everything that the other movies tried hard to accomplish. The first two X-Men movies were directed by Bryan Singer and he took a serious approach to them. Singer didn’t throw special effects around, and he tried to ground the impossible with details that at least made them seem a little more believable. Singer wanted to make sure we understood how anything on screen could happen. But then singer dropped out from directing the third film. Matthew Vaughn (Kick Ass) was planning to direct it. when he dropped out, a rushed decision was made to hire Brett Ratner (the rush hour movies), to direct the third film. That was a big mistake.

The third X-Men movie is an okay film, and in many ways it’s fun and enjoyable, but it’s not of the same caliber of greatness as the series was both before or after this entry. Matthew Vaughn might have dropped out of X-Men III, but after seeing the debacle that Ratner made of his ideas, Vaughn had to redeem the franchise, and so he directed x-men first class. That film was much more on the same level as the earlier films. Unfortunately, X-Men: The Last Stand, is not.

There are plenty of both positives and negatives with this third movie. One positive is definitely that we get many deaths of main characters and resolutions to story arcs. It would be a major spoiler to list off all the characters that die in this film, and so I won’t do that, but let’s just say it’s enough that this movie really does feel like the last stand. It feels like both the hero team and the enemy team (the brotherhood), can and will never be the same after the events that take place in this movie. there’s just such a great magnitude of the characters who either die or leave their teams permanently.

another thing cool about the movie is the way it opens with flashbacks of previous events, (lord of the rings style), first showing us something from twenty years earlier and then ten years earlier. this just gives us more to the story, and helps expand the universe. especially in the case of the jean grey opening, where we get to see professor x and magneto back when they used to work together. i also like the scale and ambition of the film. this movie really does feel like a battle. in the first two x-men films, we heard again and again that there was a war coming. we heard it in the the first movie, and thought maybe that war would be in the second movie. it wasn’t. instead, we again heard that there was a war coming. well, in the third movie we finally get to see it. The problem is it feels more like a battle than a war.

the battle that i am referring to takes place on Alcatraz island in san francisco, which is a cool location for it. and i like that it takes place both outside and inside the laboratory building. but there probably should have been multiple battles that could really constitute a war. the action is big here, and it needed to be in order to outdo the other films as far as excitement and scale, but this movie had to go crazy with special effects in order to accomplish this, and therein lies the problem.

the effects in this movie are outrageous. when bryan singer would have an object move through the air and start flying, in the first two films, he would do it slowly and gracefully, so that you could see it shaking around a little before it started lifting up. and when it did move, it still looked like the object and not like a cartoon drawing of the object. ratner’s film does the opposite. large objects fly around in the air at free will. in the very opening scene, when a young professor x and magneto go to visit a child jean grey, she lifts all the cars in the street up into the air in one quick motion, and right away we know this is a different kind of film. we can tell that this movie will be carefree with it’s approach to special effects. it’s the lazy approach. director ratner is the kid in the candy store, showing absolutely no restraint.

when the arch angel (ben foster) jumps through a window in the next scene, of course he is unscratched and uncut. and when wolverine and storm go to visit alkaline lake, the site where jean grey has come back to life, there are objects like scott’s glasses and rocks just floating around in the air. has ratner completely missed the point of singer’s approach to making these movies? the idea to singer’s films was to keep things feeling as if they could possibly happen. especially in the first half of each film (as they went on and built toward their climaxes, they did start to rely on effects too.) but in x men III from the very first scene, ratner shows no patience or self-control.

the disregard for plausibility attitude is carried on in other ways too, besides the special effects. it’s pretty ridiculous to believe that the president of the united states has a mutant in his cabinet, and if he did, would it really be a guy as bright blue and monster-looking as the beast? and if the beast was working in the white house, would he really be asleep at his job? that moment is just meant to show him hanging upside down, but what about taking the time to actually think why he’s sleeping?

the storyline to this movie is about humans finally inventing a cure that will erase the mutant gene, and turning it into a weapon. the chemical cure is put into a gun and when they fire it at a mutant, the mutant turns into a regular human. this all sounds way too simple. and it leads to corny lines of dialogue like, “they will draw first blood,” and “in chess, the pawns go first.” as if this wasn’t bad enough, the movie thinks these lines are so smart that it actually repeats both of them, having magneto (the great ian mckellan) say, “i told you they would draw first blood,” and “that’s why the pawns go first.” as if we didn’t hear these lines the first time. still, the cure plot line is pretty cool, and i like that one of the main character x-men actually wants to take the cure and realizes that it will help her feel the way she has always wished she could.

i do like the use of the phoenix storyline here, and everything that happens to jean grey definitely builds the movie and even the series to the giant conclusion that it needed, but i only wish they tried harder to make it look somewhat real. for example, did they have to move the golden gate bridge around in the air to get to Alcatraz island? another example comes when magneto leads an ambush on a couple of vehicles on the road, including a large truck. remember how in the dark knight, batman flipped the joker’s truck into the air and upside down? that stunt was actually done for real, using a real truck and wires. and it looked real. but here, in X Men III, when brett ratner does it, he just uses a drawing of a truck and moves that drawing around. then he crushes the drawings of cars behind it. computer effects look fine when they are used in small doses, but when they are overused like they are here, we get a mess. i like some of the plot lines here and the way the movie builds momentum and ends big, but there are also way too many things that are rushed or handled poorly. there’s too little effort put into making this movie feel the way it should, and to giving us the kind of dialogue we deserve. in the end, there’s plenty to like about x-men III, but not enough to even put it in the same league as the other films of the series.