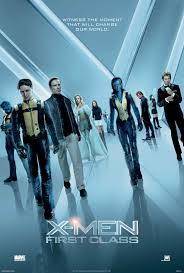 It’s as smart as any of the other films in the franchise and really does a nice job of explaining and diving head first into everything about this world.

This is a pretty fine movie. it’s got the action to match with any X-Men movie, but the creativity to show us the origins of how these characters came to be. That means watching Professor X as a young man who is recruited by the C.I.A. to help them during the Cold War, and watching Magneto as a vigilante set on avenging the murder of his mother at the hands of Nazis. The very first X-Men movie got the Nazi concentration camp idea started, but this movie digs even futher at mixing the comic book story with real history, putting itself right into the middle of not only the concentration camps but also The Cuban Missile Crisis. The movie works on all kinds of levels, and gets into the heads of Magneto and Mystieque to understand the path they would end up choosing and why.

X-Men: First Class is unquestionably the smartest x men movie in years. Pretty much since Bryan Singer ended his reign with the franchise by finishing off the first two. A lot of people hated the last two movies, X-Men: The Last Stand and X-Men Origins: Wolverine. I didn’t. Sure, they were far from great, especially on a first viewing, but after seeing them both a few times, there is still plenty there to appreciate. And that’s something that can really be said about every film in this series. All five now. There is a lot of good in each one of them, and each movie adds significant pieces to the story. In the case of wolverine and now first class, what these movies add are explanations for how things became the way they are.

That’s because both movies are prequels. Wolverine is a prequel to that character, and first class is a prequel to practically everyone else. Especially Professor X and Magneto. It’s the movie that really tells the story of how and why the x-men got started. that’s a pretty big topic to take on, especially considering that we all know from the previous movies that professor x and magneto used to be friends and on the same side, and even designed cerebro, the mutant finding machine, together.

this movie explores all of that. it really does start from scratch and build everything from the ground up. the movie is directed by matthew vaughn, who at one time was attached to make x-men 3: the last stand. I’m glad he waited it out. this first class is a much stronger project with a lot more meat to work with. and vaughn is an extremely talented filmmaker who works wonders with whatever genre and material he’s got. every film he’s made has been pretty great, and he’s explored all sorts of genres from british gangster film (layer cake) to magical fantasy (stardust) to realistic superhero movie (kick ass). Now, with x-men, he’s taking on an unrealistic superhero movie about mutants with special powers, and he’s doing it as part of a world that has already been set up by four movies previously released, not to mention all of the history in the comic books.

Vaughn wisely gets the help of bryan singer (the director of the first two films) here, producing the film and helping shape the storyline. that really comes in handy since the film begins with the exact same scene that began singer’s first movie, and therefore the first film of the franchise. like that movie, this one opens with the nazi concentration camp in poland where eric (magneto) is just a boy, and is separated from his mother. in his rage, he bends and twists a giant metal gate. this movie uses what appears to be some of the exact same footage from the first movie and then expands upon it, showing us a little more of what we did not see in that film. it’s like going behind the scenes, seeing what else was happening, and adding more to what we already know. we see an evil nazi scientist watching eric bend the gate from his window and then watch him call eric up to his office to see his mother get shot in front of his eyes.

that evil scientist is sebastian shaw, played by kevin bacon. he’s the lead villain of the movie and bacon does a nice job with the character, making him completely sinister. when we meet up with eric later on, as an adult, he is on a one man mission to find shaw and kill him. he travels around the world finding ex-nazi soldiers and killing them, all in his pursuit of shaw. there’s one scene where he goes to an ex-nazi gold dealer and removes his teeth, and then a truly outstanding scene where he sits at a bar with two ex-nazi soldiers and lets them know who he is before killing them. the music and suspense of that scene are pitch perfect.

while all of this is going on, charles xavier is recruited by the cia to help them with the situation involving hostile conflict with russia. the movie takes place in the 1960s, during the kennedy administration and the cuban missile crisis. the way charles gets brought in is because a cia agent, moira mctaggart, goes undercover and sees that shaw is working with mutants himself. and he’s using these mutants to help him start a war between the u.s. and russia. so mctagart figures the cia should be fighting mutants with mutants. that, and the fact that until seeing this, nobody really knew or believed that mutants existed.

I like how the members of the cia have to be convinced to allow the mutants to help, and how there is a great objection to it. nothing is easy and nothing is taken for granted or just brushed off in this movie. matthew vaughn knows that to keep a movie grounded in reality when it needs to be, you have to show the audience things and not just hope they will assume. and so he really explains to us how charles and eric first met and how together they establish a team of mutants to train and put to work.

It’s about half way into the picture that the real training begins and we meet a number of new characters here. there’s banshee who uses sound vibrations to fly, and there’s havoc, who can blast lasers out of his chest. there’s mystique (played by the very talented jennifer lawrence, who was so great in winter’s bone earlier this year), and her character has been there at charles’ side since the two of them were kids and became adopted brother and sister. and then there’s darwin, angel, and the beast, who is really the last of the new recruits to discover all that he is capable of.

I like that vaughn gives the movie the time it needs to let these characters work out their abilities and figure things out for themselves. even magneto is still working on his powers, and charles xavier helps him by finding the balance in his thoughts and using it to turn a giant satellite dish. and for the third part of the film, vaughn puts us flat in the middle of the cuban missile crisis. it’s a pretty ingenious move, setting the movie in real historical events, and something that hasn’t been done in this franchise since singer brought in the nazis at the very start of the first film. but it helps to ground the movie in reality. i like how the villain sebastian shaw has ties by the end of the movie to both the nazi party and the communists of russia. especially when you consider that these were our two biggest enemies for most of the 1900s.

The movie has a ton of things going on that none of the other films would have dared to address. there’s a lot about exactly what and what not charles xavier’s telepathic ability can do, especially when the other side has a telepath too. the yellow costumes from the comics finally come out. and the movie even embraces it’s sixties atmosphere, having characters say words like “groovy,” instead of taking the approach that hearing words like this in a movie of today would sound silly. instead, this movie goes for it all, including offering explanations at the end to just about everything. and it gets away with it all. that’s because this isn’t an action movie with casual explanations thrown in every so often. instead, it’s a movie that is all about giving us those answers as it’s primary goal. the first half of the film did not feel like an action movie at all, and that’s a good thing. as a result, it was able to focus a lot of attention on the plot and on eric as a nazi hunter, tormented by his past, and a very powerful movie came out as a result of all this.