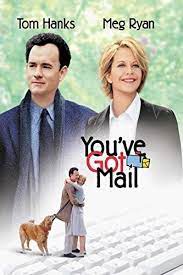 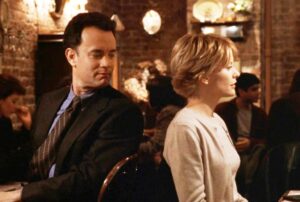 Cutesy and light-hearted, without being especially smart or funny, this movie is okay, but far from anything special.

This is an okay romantic comedy where the plot is incredibly thin and yet there still manages to be some funny moments and situations from time to time. The premise is that two characters are having an email correspondence with each other despite never having met face to face, and not really knowing who the other one is. They met in a chat room, struck up a connection, and now continue to chat online. Meanwhile, in the world of face to face interactions, they also know each other and are actually in competition against each other. Only they don’t know that the person they are in competition with is the very same person they are emailing with. So basically the entire movie is based around one single secret. Talk about thin. And yet they manage to get some good things out of this one, every once in a while. Chalk that up to the natural chemistry and charm between these two actors. It’s not enough to save the movie, but at least it sometimes gives us moments to smile or chuckle about.

You’ve Got Mail is a very simple and basic romantic comedy, based on the classic Jimmy Stewart 1940s movie,  The Shop Around the Corner. The premise is that two characters who have had a mail correspondence with each other, and are friends through mail, also meet in real life. Only they don’t realize that the person they are meeting is the same person they are talking to through mail. And so, in a sense two different relationships form and play out throughout the movie. The one by mail, and the one in person. And the one in person, interacting with each other face to face, involves the two characters disliking each other until they eventually fall for each other, just like any romantic comedy. So it’s a decent premise, and might be a nice one for a short story, but for an entire feature length movie, it ends up being kind of thin.

In the Jimmy Stewart movie, the characters wrote letters to each other and sent them through the mail. They also worked together at the same store. In the Tom Hanks – Meg Ryan remake, the premise is basically the same, but some key elements have changed. The characters use America Online to communicate, one of the first email platforms in the early days of the internet. And even more importantly, there’s the competition involving their line of business. Instead of having them work in the same store, here they are against each other, and competing in business.

Kathleen Kelly (Ryan) is the owner of a small children’s book store. It’s the kind of place that sells rare, expensive, hand-crafted books and does things like afternoon story time where kids can just come in, sit down on the rug, and listen to a story. Joe Fox, (Hanks,) meanwhile, is the owner of a huge book store company that opens up new mega stores left and right, called Fox Books. It’s basically a version of the Barnes and Noble book chain. The problem starts when it is announced that there will be a new Fox Books store opening just a few blocks away from The Shop Around the Corner (the name of Kathleen’s store.)

Both Kathleen and Joe are in serious relationships. Kathleen’s is with Frank (Greg Kinnear,) a newspaper writer who writes articles that champion the underdogs in situations like this. Joe is with Patricia (Parker Posey,) an always busy, always in a hurry, executive. Patricia and Joe don’t seem to have much chemistry, other than that they both live a sort of elite, exclusive lifestyle. But Joe is deeper and more calm, and generally has the time to hear what people have to say, whereas Patricia does not. Frank and Kathleen, meanwhile, have more in common. In fact, at one point, Frank even champions Kathleen’s book store and writes about it in his magazine.

Kathleen and Joe meet in person for the first time when Joe arrives at her book store with two children. The children are his half brother and his aunt. Now, this story element is pretty dopey. All of the side characters are pretty bad in this movie, but the idea that Joe has these two kids to pal around with, and their strange relationship to him, takes the cake. One of the kids is the son of Joe’s father, who has just remarried. The other one is the daughter of Joe’s grandfather. And she’s just a small kid. What is the point of all this? It’s beyond confusing to figure out why the movie is doing it. Why not just have these be Joe’s kids from a previous marriage? Or if you absolutely have to make one his half-brother, why not make them both from this? It’s not a major point of the movie or anything, but the two kids do appear in multiple scenes, and making one the daughter of his grandfather is more disturbing than it is cute, which I suppose is what the movie was going for.

But this brings up a bigger problem. The side characters. Starting with Frank and Patricia, but then branching out to nearly every side character in the movie, they pretty much don’t work. And the movie just keeps giving us more of them. In fact, it is because the plot is so thin, and there really isn’t a whole lot going on in the story, that the movie decides to give us as many side characters as possible. That includes three different other characters who work at Kathleen’s store. There are two younger characters,  a woman and a man (played by Steve Zahn,) and then there’s an older woman who was the sister of Kathleen’s mom. The reason why that’s especially relevant is because Kathleen’s mom owned the store before she passed away, and this is the story of the store closing.

Unfortunately, the movie doesn’t do a whole lot with this. It isn’t interested in being deep or sad in any way, and instead prefers to be light hearted, whimsical, and cute at all times. And that’s a problem, because there is very little funny here. The only scenes that hold up are the ones between Hanks and Ryan, and even those are hit and miss. There are story punchlines here and there that become the highlights of the movie, but even these aren’t anything special. The first of these highlights comes when Joe and those kids visit Kathleen’s store and Kathleen talks to Joe about how horrible it is that a Fox bookstore is opening up right near them. Watching Joe take this in, that this woman hates him so much, without actually knowing that he’s the one opening the store is kind of fun. And the movie even comes up with a clever little gimmick about it, having the boy know how to spell Fox – F -O – X, but not any other words. And Kathleen tests him on different animals.

The next of these story punchlines comes when Kathleen learns that the man she met at the store that day is in fact Joe Fox, the owner of the Fox Books store that is opening up. This happens at a party that the two are both attending, and when Kathleen finds out, she doesn’t hesitate to go right up to Joe and call him out. She accuses him of going into her store as a spy that day, and thinks he is just the most awful person in the world. So does Frank, who comes over to them and quickly learns from the conversation exactly who Joe is. Only Frank’s opinion quickly changes when Joe compliments him on one of his articles. That’s one of the few comical moments in the movie that actually does work.

The next big story punchline comes when Joe learns that Kathleen is the person he is been corresponding with through email. This happens when the two email friends decide to finally meet and the way they will recognize each other at the table is by having a certain flower in front of them. Joe walks over to the meeting place, a bakery on the Upper West Side of Manhattan, accompanied by his friend,  Kevin (Dave Chapelle.) Kevin doesn’t appear in the story much, but he actually happens to be one of the few decent side characters here, and that’s probably just because he’s Dave Chapelle, so he is just naturally funny (he was even great in A Star is Born, playing a more serous role.) Now, Joe goes up to the window of the bakery, looks in, sees Kathleen with the flower in front of her, and realizes who she is. And then he goes in.

The movie does do some smart things from time to time, centering around these plot points. One is that it has one of two character learn the secret of who they are corresponding with, at the halfway point of the movie. Movies that wait until the very end to let something like this out generally tend to feel like a big build up for something that wasn’t really worth the wait. But when a movie unleashes a major revelation like this in the middle of the film, it’s an interesting move because it leaves the audience wondering what will happen next, and how they will make the story work for another full half of the film, now that the secret is already out of the bag. Another cool move is that instead of just seeing Kathleen in the window and turning away to leave, Joe actually goes into the restaurant and pretends like his running into her there is just a coincidence. That’s another example of the movie going for the more clever and challenging move. So the movie definitely has some things going for it, but the problem is that everything that works is between Hanks and Ryan. The scenes between them. And there are only a handful of those sprinkled throughout the film. Most everything else, from the side characters to the relationships that fall apart in order for these two to finally get together, are pretty dull. And all of that fluff and filler that is not the two stars on screen together leads to the movie being just okay.

View more posts from this author
« Doctor Strange and the Multiverse of Madness **1/2
2016, Mid Year Roundup »